ATP Finals Prize Money: World’s top eight players in the men’s singles are set to battle it out for the biggest ever…

ATP Finals Prize Money: World’s top eight players in the men’s singles are set to battle it out for the biggest ever prize money in the history of Tennis as ATP has confirmed a record-breaking prize pot this year for the ATP Finals. The season-ending championship in 2022  is set to take place in Turin from 13th November to 20th November. Follow ATP Finals 2022 LIVE updates on InsideSport.IN

As per the ATP, if a player wins the tournament without losing even a single match across the week in the ATP Finals in 2022, they will pocket £4,230,030 ($4,740,300). This is the biggest ever prize money that will ever be awarded to the winner, which surpasses the previous best of  £3.9m ($4.2m) that was won by Ashleigh Barty in the 2019 WTA finals. Apart from the big prize, the winner of this tournament is also set to be awarded with 1500 ranking points as well as a trophy.

Doubles players too will receive a record winner’s cheque as they are set to get £830,159 ($930,300). Even the alternate players who will be invited for the tournament as a backup to the eight qualifiers will collect $ 150,000 even if they don’t play a match.

Check out the complete prize money in the ATP Finals 2022 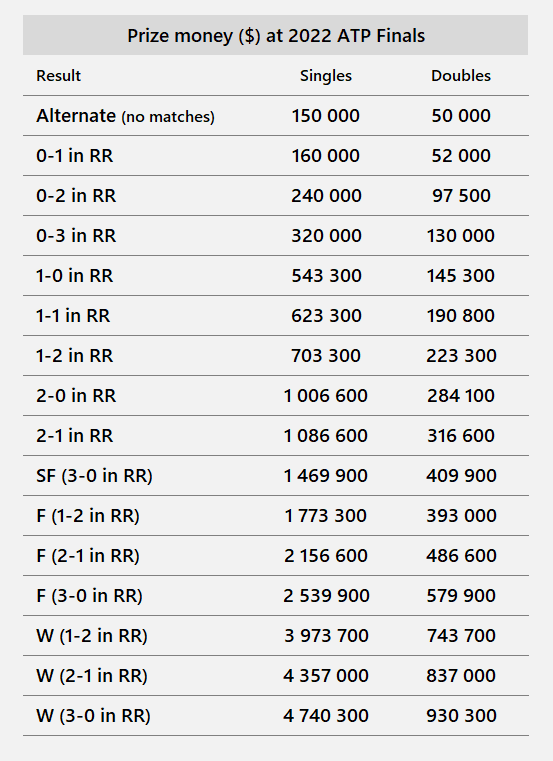 The ATP Finals is a tournament where all the eight players will first compete in a round-robin format with all the players playing three matches each. Top four players will then advance to the semifinals. A player that wins all the five matches will receive the big pay cheque this season. This increase in prize money is thrice the amount offered during the 2019 edition, which was

So far five players have qualified for the ATP Finals this year that includes World No.1 Carlos Alcaraz, Rafael Nadal, Casper Ruud, Novak Djokovic and Stefanos Tsitsipas. For the remaining three slots there is an intense competition going on in the tour. Djokovic has booked a spot in the tournament despite being 10th in the race to Turin this year as ATP allows a spot for a Grand Slam champion that year if they are within the Top 20. The Serbian won the Wimbledon this year which was his 21st Grand Slam title.

Matthew Mott keen to welcome back Ben stokes from ODI Retirement, says the more we get him is great