Incidentally, it was Prannoy’s first win over Momota in eight matches. In their previous clashes, the Indian won only one game against his higher-rated Japanese rival.

Earlier in the day, reigning Commonwealth Games champion Lakshya Sen sailed into the pre-quarterfinals with a straight game win over Spain’s Luis Penalver. 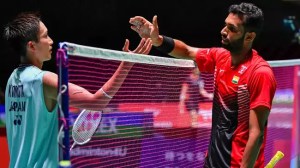 Prannoy and Sen will face each other in an all-Indian last 16 clash on Thursday.

Srikanth went down against his Chinese counterpart 18-21, 17-21 in a match lasting only 34 minutes.

The 29-year-old was out of sorts in the opening game as it took only 12 minutes for Zhao to take a 1-0 lead in the match.

The Indian, already on the back foot, tried to up the ante in the second game and led 16-14 but too many unforced errors helped Zhao secure the victory.

Sen won his second round contest 21-17 21-10. After trailing 3-4, the ninth seeded Sen grabbed a six-point lead to be 13-7. The Indian continued to stay ahead before comfortably wrapping up the first game.

Sen, a world championship bronze medallist, then maintained his stranglehold over the Spanish shuttler and won the second game by a bigger margin.
In the second game, the first six points were shared between the two players, but the 21-year-old Indian pulled ahead riding on his superior play.

Enjoying a massive nine-point lead at one stage of the second game, it was only a matter of time before Sen completed the job.

Earlier, the Indian men’s doubles pair of MR Arjun and Dhruv Kapila moved to the pre-quarterfinals but Ashwini Ponnappa and N Sikki Reddy made a second round exit from the prestigious tournament.

The unseeded Arjun and Kapila upset eighth seeds and last edition’s bronze medallists Kim Astrup and Anders Skaarup Rasmussen of Denmark 21-17, 21-16 in their second round match.

They will face Hee Yong Kai Terry and Loh Kean Hean of Singapore next. Ponnappa and Sikki, on the other hand, were handed a 15-21, 10-21 loss by top seeds Chen Qing Chen and Jia Yi Fan of China in 42 minutes.

The other women’s doubles pairing of Pooja Dandu and Sanjana Santosh’s also crashed out of the tournament, going down to third seeds Lee So Hee and Shin Seung Chan of Korea 15-21, 7-21.

The eighth seeded men’s doubles pair of Chirag Shetty and Satwiksairaj Rankireddy thrashed Guatemala’s Solis Jonathan and Anibal Marroquin 21-8, 21-10 to storm into Round of 16, where the duo will be up against Denmark’s Jeppe Bay and Lasse Molhede.

What time will the BWF World Championships 2022 begin?

Which TV channels will broadcast the BWF World Championships 2022?

The BWF World Championships 2022 will be telecast on DD Sports & Sports18 channel in India.

How do I watch the live streaming of BWF World Championships 2022?

The BWF World Championships 2022 will be streamed live on the VOOT Select app and website.

Rep. Marjorie Taylor Greene says she was the victim of a ‘swatting’ attack