PAK vs SL Highlights – Asia Cup Final Highlights: SriLanka win by 23 runs: Sri Lanka beaten Pakistan by 23 runs in the Asia Cup final to bag the trophy for a 6th time. It was nothing but a fairytale rise for the Lankans. With an economic crisis back home and the ashes of civil war still settling, nobody gave Dasun Shanaka a chance. But Bhanuka Rajapaksa, Wanindu Hasaranga and Pramod Madushan scripted the downfall of Pakistan in the final. Check SriLanka beat Pakistan Highlights with InsideSport.IN

It was a test of temperament for a side that found it difficult to hire a coach. There was a constant change in captaincy. The island nation could not even host the tournament due to the economic crisis and the political turmoil back home. To make matters worse, the team was severely criticised by former captain Arjuna Ranatunga and their MPs after their crushing defeat to Afghanistan in the first match.

However, credit goes to captain Dasun Shanaka and coach Chris Silverwood. Both had a point to prove. If Shanaka was rebuilding a team, Silverwood came to the island nation after being sacked by England following a string of disastrous results. But both turned things around.

Sri Lanka went on a 4-match unbeaten streak to slay two giants India and Pakistan en route final. And the man they discarded for poor fitness was their star with the bat throughout the tournament. Bhanuka Rajapaksa was only given a second chance after his IPL 2022 exploits with Punjab Kings. And the man turned the tide after Pakistan had them by neck in the final at 58/5.

Sent to bat, it was always tricky. Pakistan pacers extracted the early advantage with Naseem Shah, Haris Rauf and  Iftikhar Ahmed sharing the wickets. But then came the fightback.

Bhanuka Rajapaksa, determined to do well, played a match-winning knock of 45-ball 71 hammering 6 fours and 3 sixes. But more importantly, it was his partnerships that changed things for Sri Lanka. First, he added 36-ball 58-run partnership with Wanindu Hasaranga taking the attack to Pakistan. While Hasaranga fell for 21-ball 36, he continued with Chamika Karunaratne. The two added 54 runs off 31 balls, posting up a competitive 170/6 total.

Storm Warning: Take cover for the 💥💥 slog overs in #SLvPAK!

Do not miss a minute of the action from the DP World #AsiaCup2022 Final, LIVE NOW on Star Sports/Star Gold/Disney+Hotstar! pic.twitter.com/siqcJFCjYc

In fact, Sri Lanka scored 105 runs off the last 10 overs after going 67/5 in the first 10. That late assault including a 16-run over and a 15-run over off Naseem Shah gave Sri Lanka the platform.

However, Pakistan should also take the blame for poor fielding. Shadab Khan dropped Bhanuka Rajapaksa when he was just 46. Then again, a fielding blunder by Shadab Khan and Asif Ali saw him survive yet again in the 19th over. The result, Sri Lanka loset just 1 wicket for 105 runs in the last 10 overs.

“It was not easy out there. Pakistan were bowling well. When Wanindu came in, we got a plan. We wanted to be positive all through. When Iftikhar was bowling, Wanindu said that he would attack him. But thankfully both of us went hard. I had to change my game because Pakistanis were on top.

We wanted to spend some time in the crease and that helped in getting 170. When Chris Silverwood came out to talk to us after the 10th over, I told him that 140 was a good score. But we stayed till the end and the target was much different. The last ball six and the last over helped us with the momentum and this is a game of momentum,” Bhanuka Rajapaksa said after the match.

The chase was never going to be simple but the way Sri Lanka began, it did not see so. Dilshan Madushanka bowled an 11-ball first over, conceding 10 extras. But Pakistan batters failed to capitalise on that poor start.

Babar Azam, out of form in T20s, was dismissed by young Pramod Madushan (4/34) in the third over. In the next ball, Fakhar Zaman departed, giving Sri Lanka a big opportunity to put a stranglehold on them.

🤩😍🤯 – us watching the second innings Powerplay of the DP World #AsiaCup2022 Final!

With Mohammad Rizwan and Iftikhar Ahmed still on crease, the chase looked simple. But there were no loose deliveries and Sri Lanka’s excellent fielding meant, 4s became 2s. The entire team, including substitute fielder Ashen Bandara put up a memorable fielding performance, saving close to 30 runs. In the end, it made the world of difference.

Although Rizwan and Iftikhar added 71 runs, it came at a cost of 59 balls. And then, came another batting collapse. Wanindu Hasaranga (3/27)  bagged three wickets in one over in the 17th to break Pakistan’s backbone.

However, Rizwan should also take the blame. He was never on the attacking mode. His 55 came off 49 balls with just 4 fours and a six. In those 49 balls, 14 were dots and 23 singles. Iftikhar scored 31-ball 32, leaving nothing for the powerhitters. As the scoreboard and required run-rate pressure mounted, Pakistan fell apart.

“Congratulations to Sri Lanka for playing outstanding cricket. We dominated them for the first eight overs, but the partnership that Rajapaska got was amazing. This was a true wicket and it is always nice playing in Dubai. We didn’t bat according to our potential. We started well, but we gave away 15-20 extra runs and couldn’t finish well. In a final, the margin for mistakes is lesser. Our fielding wasn’t up to the mark and the batting couldn’t finish it off well. It would be nicer if we made lesser mistakes,” Pakistan captain Babar Azam said.

For Dasun Shanaka, it was about redemption. Not just for Sri Lanka cricket who had to wait 7 years to lift the Asia Cup once again but for a nation under distress. He hoped that the win made few people back home smile.

“I want to thank the crowd; they have been supporting us massively. Hopefully, we made them proud today. In IPL 2021, Chennai won the match batting first and that is what was in my mind. These youngsters know the conditions really well. Wanindu made a huge impact after losing five wickets. Chamika and DDS batted really well too.

The last ball six was the turning point. 170 was mentally the difference, as 160 always feels chasable. As a youngster, we knew Madushanka would deliver, and as a captain we had to back him. It can happen to any team in the world,” Shanaka said at the post-match presentation. 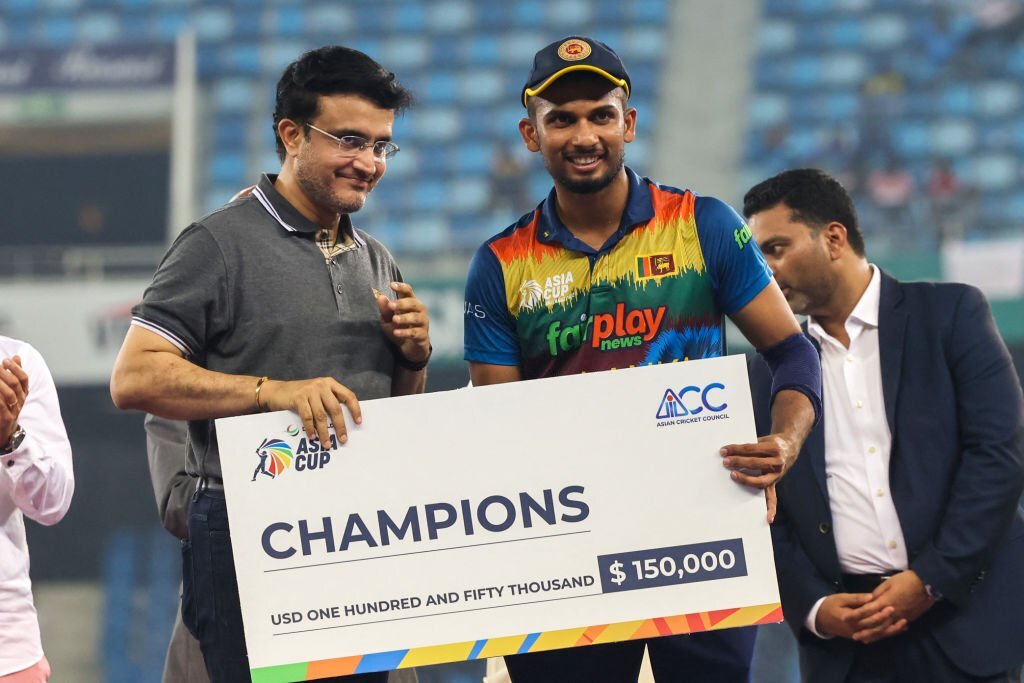 Shanaka said the crushing loss to Afghanistan changed the momentum.

“It happened for a good reason. We had serious discussions after that game. Each and every individual did well for us and that is how we became champions. The fielding improved a lot in the finals. We had some mistakes in the league stages. We were 100% today, credit to the players and the coaching staff. I want to thank the Sri Lankan cricket board and the selectors as well,” he added.

PUBG Mobile Esports releases PMGC 2022 Theme Song ‘BE THE ONE’