🇮🇳 India Legends stood way ahead in the encounter from the beginning till the end against South Africa Legends and as a result, they won by 61 runs!

India has made a brilliant start to their Road Safety World Series campaign with this all-round show. South Africa on the other hand has a lot to fix if they want to progress further. Chasing 218, Andrew Puttick and Morne van Wyk put South Africa Legends to a fine start. Spinner Rahul Sharma delivered India a breakthrough, trapping van Wyk lbw for 26 off 24 balls.

Soon, Pragyan Ojha also dismissed Puttick for 23 off 24 balls, with Sachin Tendulkar taking the catch. South Africa Legends were 2/58 at this point.

South Africa continued losing wickets to Indian spin, with Ojha trapping Alviro Petersen for just 10 after he was stumped by Naman Ojha. Then, Henry Davids’s wicket was taken by Yuvraj. Davids could only score six runs.

More than halfway into the match, South Africa was 4/90. Rahul Sharma got his second wicket after dismissing Jacques Rudolph for 16 runs off 14 balls. 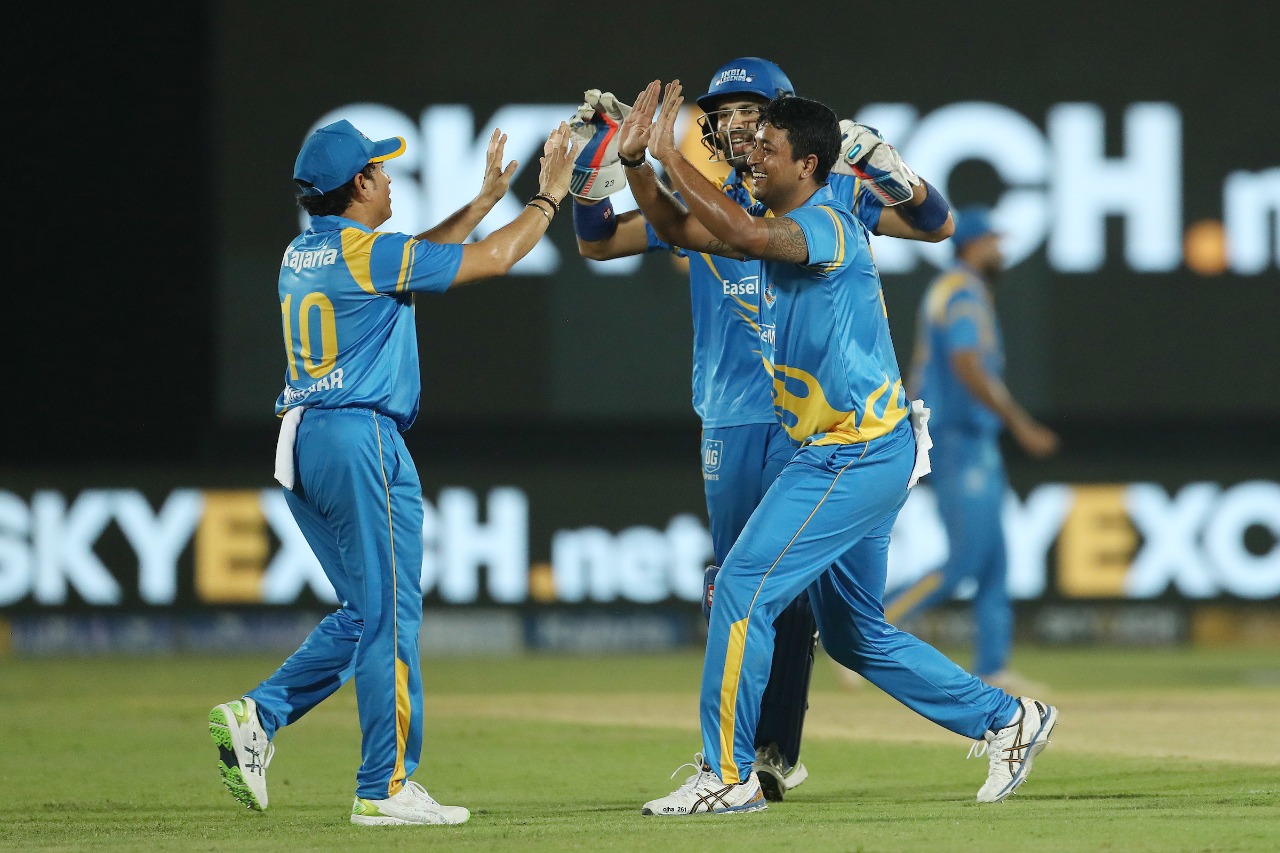 Munaf got his second wicket in the match, dismissing Makhaya Ntini for six. With this, SA was left at 142/9 with an over left to get an unachievable 76 runs.

South Africa ended their innings at 156/9, getting fourteen runs in the final over. Captain Jonty ended as top-scorer for his side with 38 off 27 balls. India Legends won the match by 61 runs.

Rahul (3/17) and Pragyan Ojha (2/32) did damage with their spin while Munaf Patel also got two wickets. Irfan and Yuvraj got one wicket each.

Electing to bat first, India Legends were off to a good start. Openers Naman Ojha and Sachin Tendulkar played some fine shorts to the delight of nostalgic fans. However, South African pacer Makhaya Ntini ended the 46-run stand in just 5.2 overs by dismissing Tendulkar for just 16 off 15 balls after he was caught by Johan Botha.

Then Suresh Raina, who recently retired from all formats of the game became centre stage of fans’ attention, scoring runs with ease. Stuart Binny was also firing quick runs from the other end. They put on an enjoyable 64-run stand, which ended with Raina’s dismissal for 33 off 22 balls by Eddie Leie. Following this, a struggling Yuvraj Singh also fell cheaply for just 6 off 8 balls, reducing India to 129/4 in 14.3 overs.

This brought hard-hitter Yusuf Pathan to the crease. After his arrival, the scoring rate of India Legends started rising massively, with both batters taking the aerial route. Binny also completed his half-century.

By the time 20 overs were completed, India had scored a massive 217/4.

Binny scored a brilliant 82 off 42 balls with five boundaries and six sixes. Yusuf Pathan also brought back his power-hitting avatar to smash 35* off just 15 balls with a boundary and four massive sixes.

IND vs AUS T20: Sourav Ganguly’s BIGGEST Compliment for Virat Kohli, says ‘he is more skilful than me’: Check OUT