Also read – IND vs ENG LIVE: Virat Kohli’s T20 return marred by another failure, is it END OF THE ROAD for the former India captain? 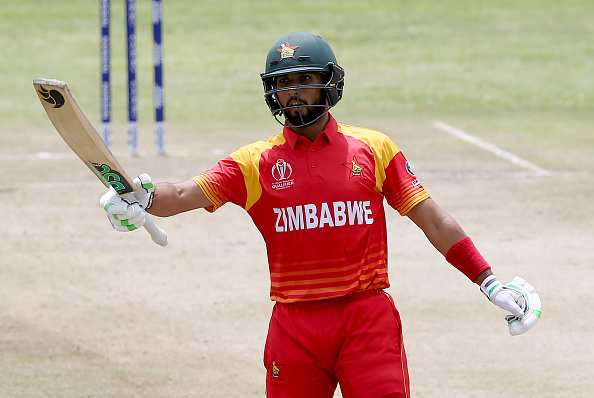 Singapore never looked like matching the run rate of the home team and managed just 125-7 with unbeaten Janak Prakash (32) top scoring and Surendran Chandramohan (21) the only other contributor of note.

Tendai Chatara (3-14) and Blessing Muzarabani (2-21) were the most successful bowlers for Zimbabwe, who are seeking a sixth T20 World Cup tournament appearance.

“This was a great start. The coach has emphasised the need to not only start the tournament well but finish it equally well. Our goal is to qualify for Australia,” said Raza.

“We want the other seven teams to know that we are determined to secure one of the two qualifying places on offer and I think we did that really well.

“The win over Singapore is history now. The focus of my teammates and I has already shifted to the match against Jersey tomorrow.”

A United States side including former South Africa fast bowler Rusty Theron defeated Jersey by eight wickets in the other Group A clash.

Jersey, one of four contenders in Bulawayo hoping to reach the T20 World Cup for the first time, made 154-5 off 20 overs.

Batting at number three, Asa Tribe struck an unbeaten 73, including six sixes, for Jersey, a tiny London-ruled island between England and France.

The USA surpassed that total by reaching 159-2 with 11 balls to spare and opener Steven Taylor (101 not out) starred. He faced 55 balls and fired five sixes and 12 fours.

If Zimbabwe beat Jersey and the USA defeat Singapore on Tuesday both will secure semi-finals places, leaving the hosts and the Americans to fight for first place in the group on Thursday.

Four-time qualifiers the Netherlands lived up to their billing as Group B favourites with a 52-run victory over Papua New Guinea.

The Dutch won the toss and posted 163-7 with Stephan Myburgh (39) top scoring while Semo Kamea and Charles Amini took two wickets each for the Pacific islanders.

Papua New Guinea were all out for 111 in 19.4 overs having never matched the Netherlands run rate. Sese Bau (35) was the only batsman to impress while Logan van Beek (3-17) was the pick of the Dutch bowlers.

Uganda surprised Hong Kong in the same group, winning by two wickets in a low scoring affair. Replying to 87-9, the Africans reached 88-8 off the third ball of the final over.

Wins for the Netherlands over Hong Kong and Uganda against Papua New Guinea on Tuesday will seal semi-finals places.

The Bulawayo finalists will join 14 other nations at the T20 World Cup in Australia from October 16.

FT hires Bryan to cover sustainability in Europe and Africa

Democrats accused of overreacting with rush to ban abortion extraditions