US Open 2022: Tennis Championship : Frances Tiafoe believes a new generation of players are ready to take over from tennis’s “Big…

US Open 2022: Tennis Championship : Frances Tiafoe believes a new generation of players are ready to take over from tennis’s “Big Three” after his stunning upset of Rafael Nadal at the US Open on Monday. Follow US Open live updates on InsideSport.IN

Tiafoe produced the biggest shock of the tournament so far with a dazzling performance to send Nadal spinning to his earliest exit from the Open since 2016. Nadal’s 6-4, 4-6, 6-4, 6-3 defeat, and Serena Williams’ exit from the women’s draw last week, are further evidence that a golden era is drawing to a close. 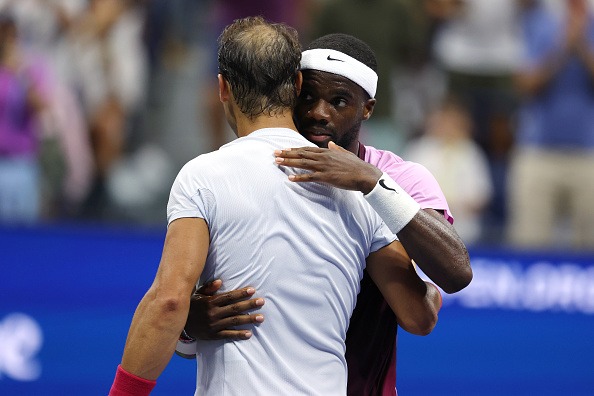 This year’s US Open marks the first time since 2003 that at least one of Williams, Nadal, Roger Federer or Novak Djokovic have not featured in the quarter-finals of a Grand Slam event. Tiafoe says the likes of himself and Nick Kyrgios, Carlos Alcaraz and Jannik Sinner are ready to seize their moment. “It’s cool to see a new era,” Tiafoe said.

“I think Nick (Kyrgios) playing great tennis is great for tennis. You see him packing stadiums when he’s playing singles, doubles, whatever. Alcaraz is a great personality. Sinner. Myself. People get behind me. “You know the American guys, Tommy (Paul), (Taylor) Fritz. There’s a ton of guys playing great tennis. “I don’t think it will be a big three. It will be like a big 12.

There’s a bunch of guys playing great tennis. “It’s good. For sure you’ll probably have someone who probably like will cement and be at the top. That’s still kind of happening. We’ll see who that person’s going to be.” On Monday however Tiafoe was more preoccupied with the here and now than the future, basking in the afterglow of a superb victory over 22-time Grand Slam champion Nadal.

A packed Arthur Ashe Stadium crowd roared in delight as the 24-year-old 22nd seed bombarded Nadal with 18 aces and 49 winners to seal victory in 3hr 34min. The win sends Tiafoe into a last eight showdown against Russian ninth seed Andrey Rublev on Wednesday. The seismic impact of Tiafoe’s win was brought home to him by a congratulatory tweet from NBA superstar LeBron James.

“Man, I was losing it in the locker room. Bro, I was going crazy,” Tiafoe said of James message. “I mean, that’s my guy. So to see him post that, I was like, ‘Do I retweet it as soon as he sent it?’ I was like, You know what, I’m going to be cool and act like I didn’t see it and then retweet it three hours later. Tiafoe said his moment of victory “felt like the world stopped.”

“I couldn’t hear anything for a minute…It was such a blur,” he said. Tiafoe began playing tennis as a four-year-old. His parents are immigrants who moved to the United States after fleeing civil war in Sierra Leone. Tiafoe’s introduction to the sport came when his father worked as a live-in caretaker at a tennis facility in Maryland.

His parents were in the crowd to watch his win on Monday To see them experience me beat Rafa Nadal, they’ve seen me have big wins, but to beat those Mount Rushmore guys, for them, I can’t imagine what was going through their heads,” Tiafoe said. “I mean, they’re going to remember today for the rest of their lives.”

In two previous matches against Nadal, Tiafoe had never taken a set off the Spanish legend. However he broke that duck to win the first set of Monday’s match, and even though Nadal levelled in the second, he regrouped brilliantly to close out a famous win. Even though he is no longer flying under the radar in New York, Tiafoe insists he won’t feel any pressure heading into Wednesday’s quarter-final.

“There’s no dark horse any more,” Tiafoe said. “It’s all good. I know what I can do, I know what I’m capable of doing these next couple matches if that happens. “I still feel no pressure. I still feel like I’m not supposed to do anything. I’m just here to play great tennis and enjoy it. I’m having fun out there, as you can see.