The year 2021 was explosive in the crypto world. Several tracks blew up, including Public Chain, DeFi, NFT, GamFi, Metaverse, Meme, and more.

According to the Wall Street Journal, the a16z crypto fund lost roughly 40% of its value in the first half of the year. Similarly, the overall performance of the cryptocurrency market in the secondary market is far worse than in 2021. However, a few notable projects, such as APT (Aptos), OP (Optimism), GLMR (Moonbeam), and others, have drawn increasing attention in the secondary market this year. Simultaneously, fan tokens became a separate large track that began to explode ahead of the World Cup.

The year 2021 was an explosive one in the crypto world. Several tracks blew up across the board, including Public Chain, DeFi, NFT, GamFi, Metaverse, Meme, and others. SHIB, GALA, AXS, SAND, MATIC, LUNA, FTM, SOL, ONE, and MANA all performed well in the secondary market, with the highest ROI reaching a staggering 16,000% or more. Although the year 2022 has been characterized by a “thick” Bear market, it is worth noting that many projects in 2022 still have relatively impressive secondary market performance. According to official sources, 150 of MEXC 2022 debut projects have increased by more than 10%, with 65 projects increasing by 10%-100%, 86 projects increasing by more than 100%, and individual projects increasing by 166% to 479900%.

MEXC project metrics in 2022 can be classified as “Mixed Signals.” The highest MEXC token increase among the top 20 projects is between 2020% and 479900%, the current increase is between 14% and 60908%, and the average highest increase is 5605%. GameFi projects have the most, with a total of seven projects, followed by NFT projects, which have three. 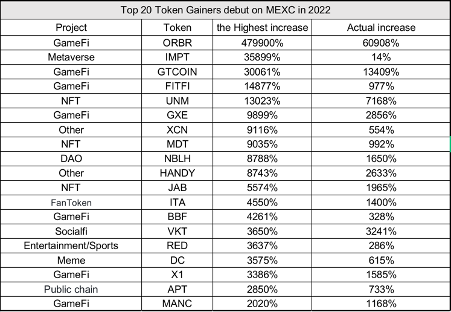 It is worth noting that GameFi projects include more than just the game category; the X2E category has not only become one of the hottest tracks in 2022 and is tied with the game category in terms of number and upward performance.

Because of the high demand and growth, major mainstream exchanges such as MEXC and Binance have the most online fan tokens. These tokens are divided into three series based on the issuing platform (chain), namely the Chiliz, Bitci, and BSC series. MEXC has 18 listed fan tokens, five of which will be launched before the end of the year.

This year, there are fewer popular new infrastructure projects in the secondary market than in 2021. There are only a few projects, such as OP, APT, GLMR, and EVMO, focusing on Layer 2 of Ethereum, the new public chain, and the cross-chain ecosystems.

Furthermore, among the Meme projects that exploded in 2022, such as SHIT, THE, CAW, and others, only SHIT has a maximum increase of 5,600%, and the overall performance is not as good as in 2021, when SHIB, PEOPLE, and SOS all had the highest increase of more than 2,053%.

However, based on the overall popularity of the primary and secondary markets, many tracks and projects are still worthy of consideration in 2022. Like the new public chains Aptos and Sui; the old public chains Ether 2.0 and Cosmos 2.0; Ether’s four Layers 2 (Optimism, zkSync, StarkNet, Arbitrum); DOGE, which constantly annoys Musk, and so on.

MEXC has 69 debut projects, ranging from NFT to GameFI and other blockchain sectors, with an increase of 10%-100%. There are 81 projects that have increased by more than 100%, with NFT GameFi and fan token tracks continuing to be the best performers.

Broadly speaking, the focus of infrastructure in the cryptocurrency market in 2022 remains primarily on old-school projects such as Ethereum 2.0, the four major Layer 2s of Ethereum, Cosmos 2.0, and Polkadot, with the exception of a few projects with well-known institutional backing and Meta backgrounds, such as Aptos and Sui. There will be fewer opportunities for new public chains, with the emphasis remaining on application-layer projects on the NFT, DeFi, and GameFi tracks. 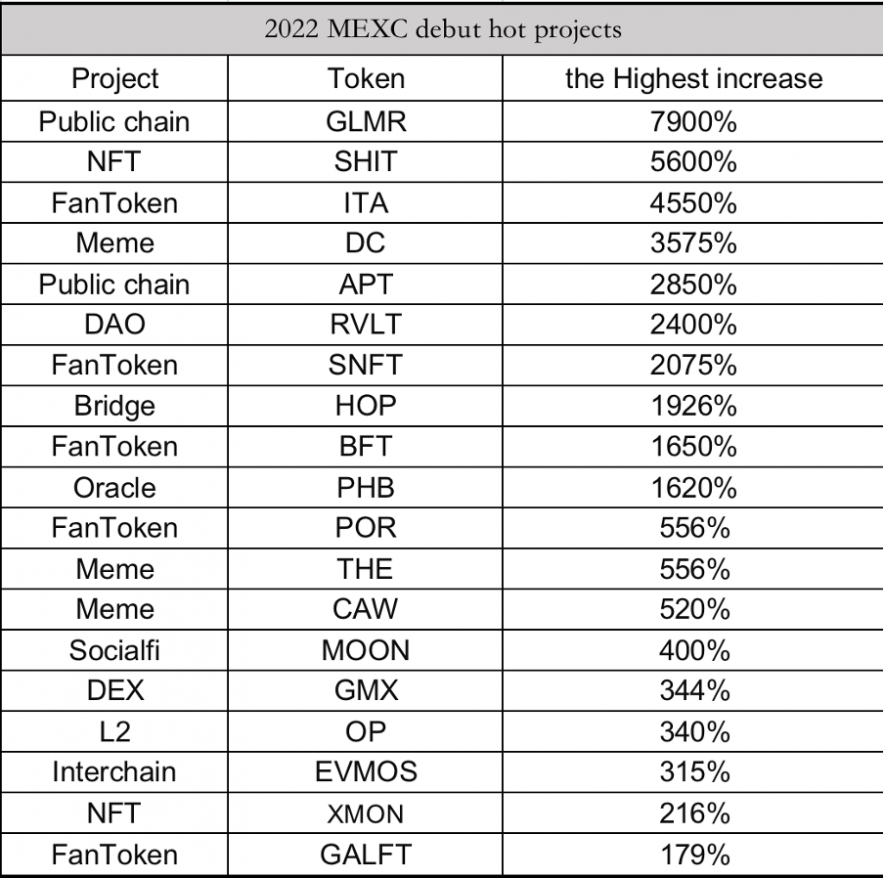 Looking back to 2021, it was the year when the cryptocurrency market exploded in full force. In addition to the previously mentioned NFT, DeFi, and GameFi tracks, the public chain, Metaverse, and Meme were the major breakout tracks in 2021.

However, the new projects for 2022 have only been operational for slightly more than a year. It is not impossible that some of the projects with high growth will be phased out by the market. It is not ruled out that some of the projects that have already failed will explode, and the market will determine all of the results to prove it. In an interview with the Financial Times, a16z partner Chris Dixon stated that he prefers to view the market downturn as an investment opportunity because the economic downturn “makes Web3 investing more appealing.”

Disclaimer: information contained herein is provided without considering your personal circumstances, therefore should not be construed as financial advice, investment recommendation or an offer of, or solicitation for, any transactions in cryptocurrencies.

Join our newsletter and be the first to know!

Thousands of subscribers are already getting their news fresh, FREE, and delivered directly to their inbox.
THE BEST WRITERS, THE HOTTEST STORIES, ONCE A WEEK

We value your privacy, your email address is safe with us.

Proof of Work – Of Dollars And Data

What Are the Best Mobile Bitcoin Slots in 2022?

Are they a Safe Broker?