“Marylebone Cricket Club (MCC) on Sunday announced amendments to the laws of cricket to move being run out at the non-striker’s end, from law 41 unfair play to law 38 run out,” MCC said in an official statement. The chatter has not stopped yet on India’s Deepti Sharma running out England’s Charlotte Dean at the non-striker’s end in the 44th over of the innings. Many players came in support of Deepti while others have different opinions and stands with Charlotte. 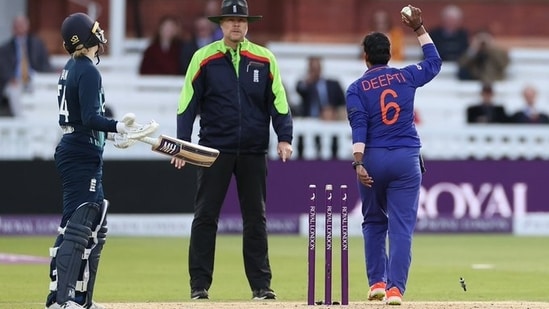 “This change will formally come into effect from October 1, 2022. This was done to clarify this matter and to place an onus on batters to ensure that they do not leave the crease at the non-striker’s end, prior to a bowler releasing the ball. The Law is clear, as it needs to be for all umpires to be able to easily interpret throughout all levels of the game and at all moments in the game,” the statement further added.

“Cricket is a broad church and the spirit by which it is played is no different. As custodians of the Spirit of Cricket, MCC appreciates its application is interpreted differently across the globe. Respectful debate is healthy and should continue, as where one person sees the bowler as breaching the Spirit in such examples, another will point at the non-striker gaining an unfair advantage by leaving their ground early.”

“MCC’s message to non-strikers continues to be to remain in their ground until they have seen the ball leave the bowler’s hand. Then dismissals, such as the one seen yesterday, cannot happen. Whilst yesterday was indeed an unusual end to an exciting match, it was properly officiated and should not be considered as anything more,” the statement concluded.

With 17 runs needed to win the third and final match of the three-match ODI series, the 10th wicket partnership on 35 and Charlotte Dean edging closer to a fantastic half-century, drama unfolded at Lord’s with Deepti running Dean out at the non-striker’s end in her delivery stride.

Sometimes, the batter at the non-striker’s end leaves his popping crease while the bowler is in his/her final delivery stride. If a bowler sees this, he/she can legally attempt to run out of that batter as per the laws of the sport.

Indian cricket legend Vinoo Mankad first did this during 1947-48 during India’s tour of Australia by running out Australia’s Bill Brown at the non-striker’s end, which earned it the name ‘Mankading’. Though many cricketers argue that it is against the spirit of the game, it is totally legal as per the laws of the sport.

Sen. Barrasso says presidents can’t declassify documents ‘by saying so’ or ‘by thinking about it’

Check out the full patch notes of PUBG Mobile 2.2 Update