Under pressure and out of form with the bat, Finch’s place in the team is under scrutiny ahead of Australia’s World Cup title defence on home soil. Team mates and selector George Bailey have backed Finch to dig himself out of his form slump and lead the team at the global tournament but Hazlewood stopped short of describing the opener’s captaincy as essential. 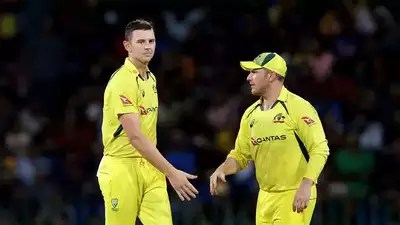 Asked how difficult it would be for Australia to have a new captain for the World Cup, Hazlewood said the team had senior players ready to step up. “All teams at the moment really feel like they’re quite senior and there’s a lot of guys who sort of take the leadership upon themselves when they’re out there in the middle doing their chosen skill,” he told reporters at the Sydney Cricket Ground on Wednesday.

Australia T20 Captaincy: Josh Hazlewood refuses to back Pat Cummins for T20 captaincy role if Aaron Finch quits, says ‘We should appoint someone with steady role’

“There’s quite a lot of experience out there in the middle and I think it would be quite easy for the next captain to come in and just seamlessly transition.” Australia are already looking for a new ODI captain, with Finch having played his last match in the format against New Zealand over the weekend.

Fast bowler Pat Cummins has led the Test team since wicketkeeper Tim Paine stepped down last year but Hazlewood said Australia might want to look outside the quicks for a new white-ball captain. “With the quicks, we’re probably going to rest (from) white ball here and there so it’s not like, I guess, Patty with the test matches playing every game,” Hazlewood said.

“That could create a reshuffle of captaincy and vice-captaincy all the time. “You probably want someone in there who’s stable and playing every game. It makes it a lot easier, I think.

” While Cummins is favoured to succeed Finch, Test vice-captain Steve Smith is also seen as a strong candidate David Warner also hopes to be considered for leadership positions, though he remains banned from them by Cricket Australia for his part in the Newlands ball-tampering scandal.

After fine show in Asia Cup, Virat Kohli moves to No 15 in T20 batter rankings, check out

France hold upperhand in HEAD-TO-HEAD , France vs Morocco at 12.30 AM,