IND vs SA – SuryaKumar Yadav Training Methods: On a difficult pitch where others struggline, SuryaKumar Yadav came & conquered South Afican bowling with MASTERFUL display. The Global cricket fraternity is singing praises of SKY. But Surya it seems is not satisfied. His wife has posted a PIC of Surya in HOTEL watching his innings and checking ‘HOW he can improve further’: CHECK OUT: Follow INDIA vs South-Africa LIVE Updates with InsideSport.IN

IND vs SA: Watch Arshdeep Singh’s BIG Interview by his coach Paras Mhambrey, he reveals ‘new delivery added to his… 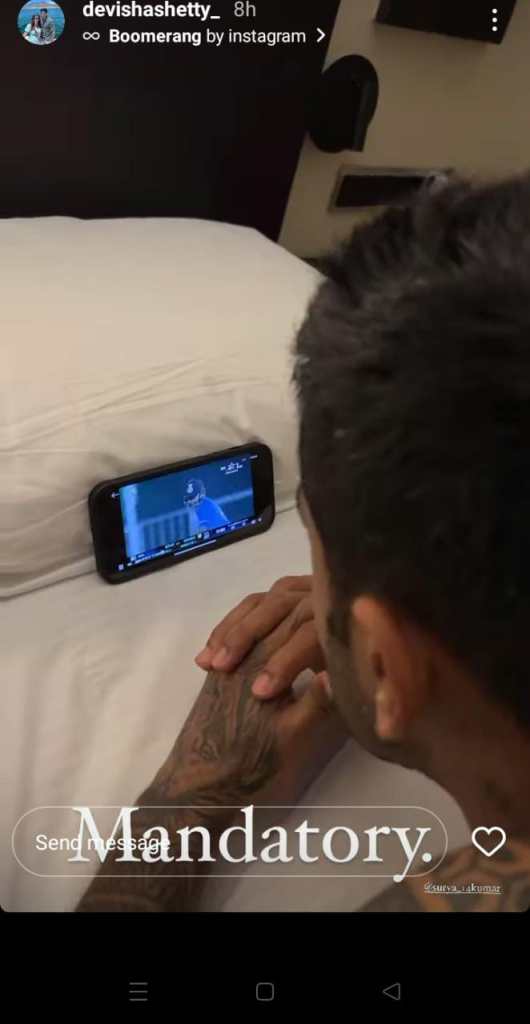 What magic Surya did? All batsmen were struggling on the pacy Trivandrum pitch. His partner KL Rahul was literally struggling to score after Rohit Sharma & Virat Kohli were cheaply dismissed.

But SKY played another scintillating innings as he hammered a 33-ball fifty to help India chase 108 and win the first T20I against South Africa on Wednesday. With this knock, the 32-year old batter has registered his second successive half-century in T20Is.

Surya shared an unbeaten 93-run stand with Suryakumar Yadav (50 not out), whose free-flowing shots gave India much-needed impetus in the chase.

“Definitely, right up there (as the toughest pitch he’s played in a T20I). We have played in some difficult conditions like this but I haven’t got runs, so this was hard work. It was unbelievable for Surya to come out there and play those shots, we have seen how balls were flying, nipping around, two-paced and everything that can be hard for a batter that was the wicket today.”

“For Surya to come with that approach after the first ball that hit him, he just woke up and wanted to play his shots, be aggressive and take on the bowling. That helped me take my time and play one end.”

That Winning Feeling! 👏 👏 #TeamIndia begin the T20I series with a superb win in Thiruvananthapuram. 🙌 🙌

Despite chasing a low total of 108, playing on a green top, the Indian batters found it difficult to get off to a good start with the new ball. Skipper Rohit Sharma was dismissed for a duck and India managed to score just 17 runs in the powerplay, which was their lowest score-ever in the first six overs of a game in the history of T20Is.

Suryakumar Yadav came into the crease after the powerplay following Kohli’s dismissal when the score was 17/2. He received a body blow in the very first ball he faced off Anrich Nortje. However he soon got into the act by scoring two back to back sixes off the next two balls. He kept the scoreboard ticking by finding boundaries at regular intervals to bring India back into the contest.

.@surya_14kumar scored a cracking unbeaten half-century in the chase & was #TeamIndia‘s top performer from the second innings of the first #INDvSA T20I. 👌 👌

A summary of his knock 🎥 🔽 pic.twitter.com/2Cz8aDRQbM

He continued with his aggressive approach that also helped his partner KL Rahul to settle in the middle as the pair shared a match-winning unbroken 93-run partnership to take India home. “For Surya to come with that approach was commendable. He wanted to play the shots and be aggressive that actually helped me take my time and play on the other end,” said KL Rahul after the match.

With the knock, Suryakumar also surpassed Shikhar Dhawan’s big record to become the Indian to score the most runs in a calendar year in T20Is. In this year alone, he has amassed 732 runs in 21 T20Is for India.

PSG vs Marseille HIGHLIGHTS: PSG bank on Neymar’s winner to edge past Marseille