IND vs ENG ODI Series LIVE – Jasprit Bumrah Special GIFT: Jasprit Bumrah had a day to remember on Tuesday. He literally destroyed England with best figures in ODI. After recording magic-haul of 19/6, Bumrah recieved a SPECIAL GIFT from the host England Cricket Board (ECB). The champion bowler was handed the MATCH-BALL with which he created havoc in England ranks: Follow INDIA England ODI Series LIVE Updates and Scores with InsideSport.IN.

Jasprit Bumrah showcases the Special Gift – Bumrah is planning to keep his SPECIAL GIFT ‘very close’ in his memrobillia showcase.

Taking it to the twitter handle he wrote, “Keeping this close.” It was a special occasion for the pace bowler as he was seen at his fluent best on Tuesday. The match bowl presented to him was marked with figures of ‘7.2/3/19/6’.

This showcased the superiority of the player as he scalped six wickets in little over seven overs while bowling three maiden overs. Remarkably, the batters could only score six 13 runs from Bumrah’s overs as six of the 19 runs came from wide balls.

The ball was also marked with ‘The Oval’ as a timely reminder of the venue where he achieved his triumphant figures.

Guard of honour by the players and crowd- 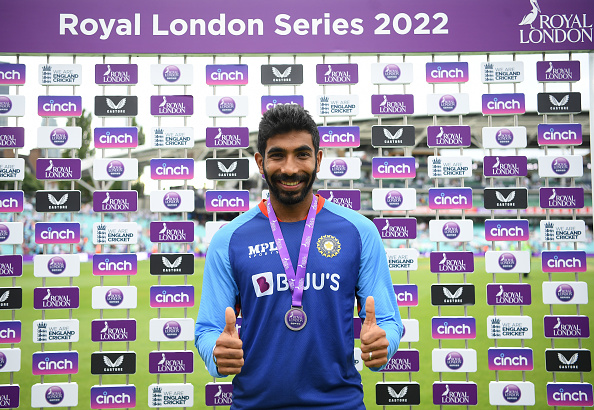 Jasprit Bumrah with the Golden Arm

While Bumrah did put up a wonderful bowling spell, his performance now places him in the third spot of the best ODI figures by an Indian bowler. The top spot, however, remains with Stuart Binny who pulled an absolute stunner against Bangladesh in 2014. Bumrah’s final figures read 6/19 in 7.2 overs with 3 maiden overs.