Jhulan Goswami farewell: The International Cricket Council (ICC) has congratulated former India captain Jhulan Goswami for an exceptional international career that saw her finish as the world’s most successful bowler in Women’s ODIs.The 39-year-old fast bowler, who retired from international cricket on Saturday after the ICC Women’s Championship series against England, played in five ICC Women’s Cricket World Cups including in 2005 and 2017 when India made the finals. Follow IND-W vs ENG-W & India Women Cricket live updates with InsideSport.IN.

Goswami also played in five ICC Women’s T20 World Cups. ICC Chief Executive Geoff Allardice praised Goswam and said she would be remembered as one of the greats of the game.

ICC Chief Executive Geoff Allardice: “Jhulan has had an incredible career over two decades, enjoying great success across formats. For a fast bowler to continue for so long is amazing and it is no wonder that she leads the list of wicket-takers in Women’s ODIs. 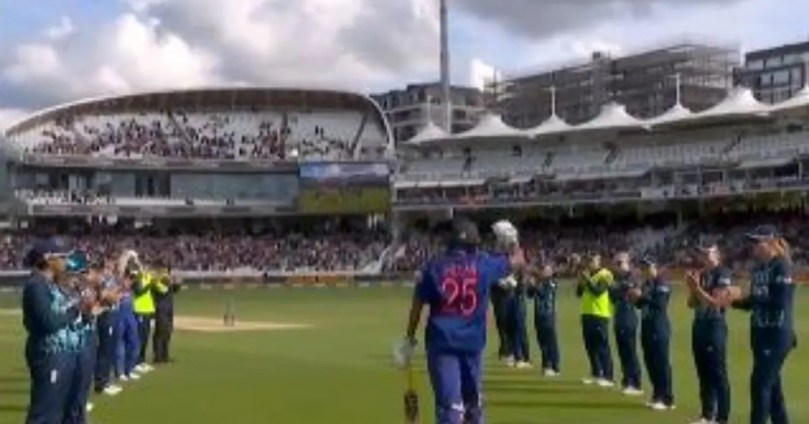 “Jhulan’s career span included a crucial period of growth for women’s cricket and her presence helped raise the profile of the game. I am sure many young boys and girls in not just India but around the world would have been inspired by her over the years. On behalf of the ICC, I congratulate Jhulan for a wonderful career.”

Goswami finished with 44 wickets in 12 Tests, 255 wickets in 204 ODIs and 56 wickets in 68 T20Is.
Renuka Singh’s four wickets haul and an all-round effort from Women in Blue helped India give Jhulan Goswami a series-winning farewell 3-0 as they bundled out hosts for 153 in the third ODI against England at Lord’s ground on Saturday.

The highlight of the match, however, was when Jhulan Goswami received a guard of honour from the players as she walked out to bat final time in international cricket. Jhulan bagged two wickets in her last outing.

She ended her career on 355 international wickets. India legend Jhulan decided to hang her boots after the ODI series against England at the iconic Lord’s. The storied career that began against England in Chennai comes to an end against the same opposition in London. She is the only player in women’s cricket to have breached the 250-wicket mark.

Jhulan bagged two wickets in her last outing. She ended her career on 355 international wickets.