We’re now into the fourth generation of foldable devices from Samsung, with the Galaxy Z Fold 4 and Galaxy Z Flip 4 arriving in stores and on customer doorsteps recently. Last year, Samsung made huge improvements to the lineup, with the main jump in my mind being the addition of water resistance. This year, Z Fold 4 and Z Flip 4 improvements appear to be more of the incremental nature, with Samsung continuing to improve its hinge design, camera offerings, and software. 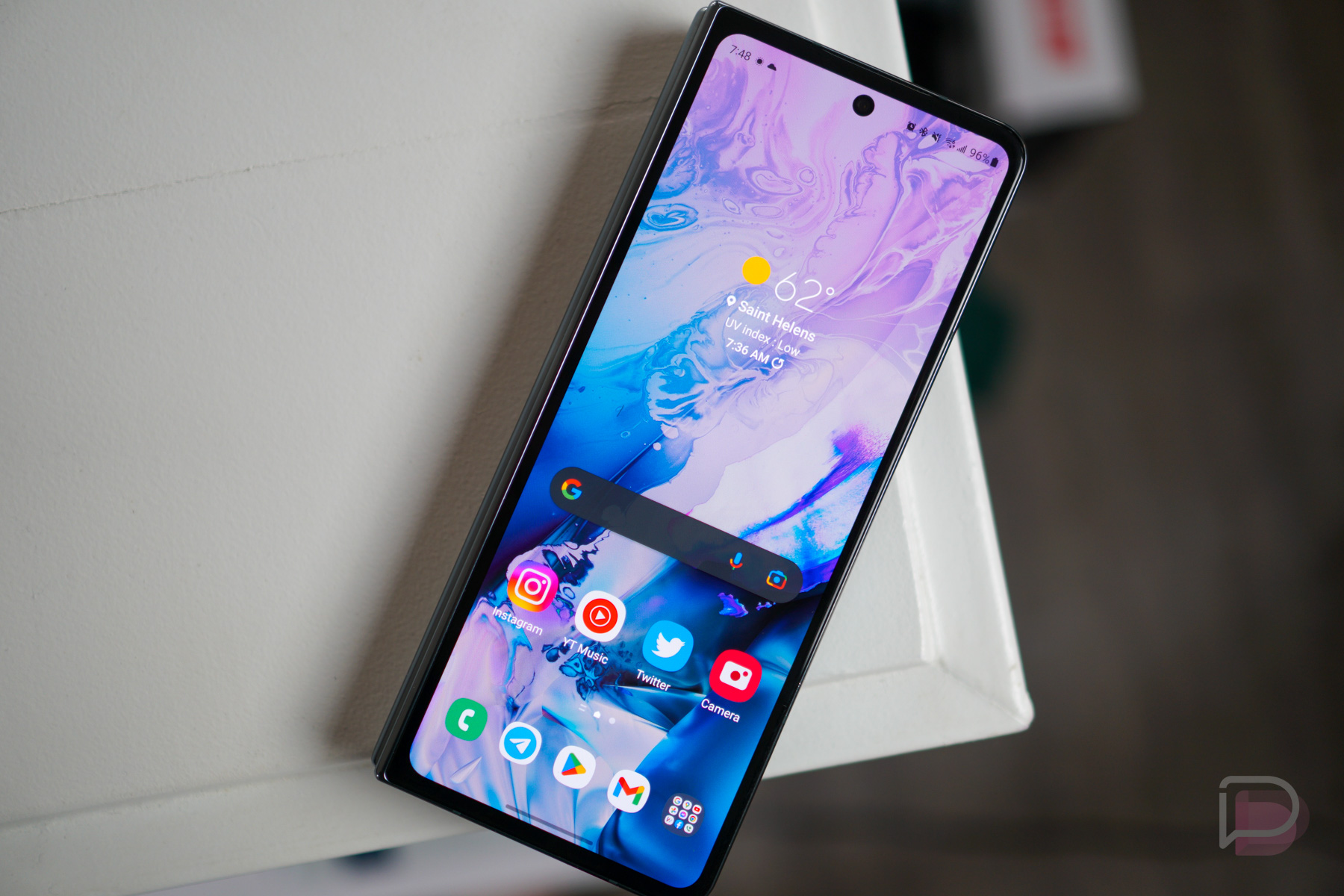 What do I like about the Galaxy Z Fold 4?

Displays. You have two displays on the Z Fold 4, the cover display that measures in at 6.2-inches (HD+ resolution with a refresh rate of up to 120Hz), plus the main display that is 7.6-inches (2176 x 1812, 21.6:18, plus a 120Hz refresh rate). For the cover display, I’m quite pleased with it. It gets very bright, so viewing it during these summer days has been easy enough, but it also gets quite dim when needed for that night time game of Waffle or Octordle. Colors do seem to pop, but at the end of the day, it’s a super tall HD+ display. It’s nothing to write home about, but at least it has that max of 120Hz refresh rate.

As for the main display, where you’re spending most of your time, its upped resolution and high refresh rate are fantastic, so long as you keep it clean. Side note: There is something about these foldable displays, likely the plastic film they place on top, that collects grease and marks something fierce. I’m constantly cleaning the display, so take note to have a few microfiber cloths around when you pick this device up.

Back to general display talk, the main display very much carries those Samsung characteristics one would expect — It gets bright, it gets colorful, and it can get black. Dark Mode is great on Samsung displays, plus if you pair it with adaptive brightness, you’ll hardly ever find yourself needing to mess with the brightness slider. And being a Samsung device, don’t be shocked by the countless display settings to play with. You can adjust that motion smoothness (refresh rate), enable the eye comfort (blue light settings), enable “extra dim,” switch between preset screen modes and then manually set white balance, and you can also dive deeper into color adjustments via “Visibility Enhancements.” There’s really nothing you can’t tweak on these Samsung displays. 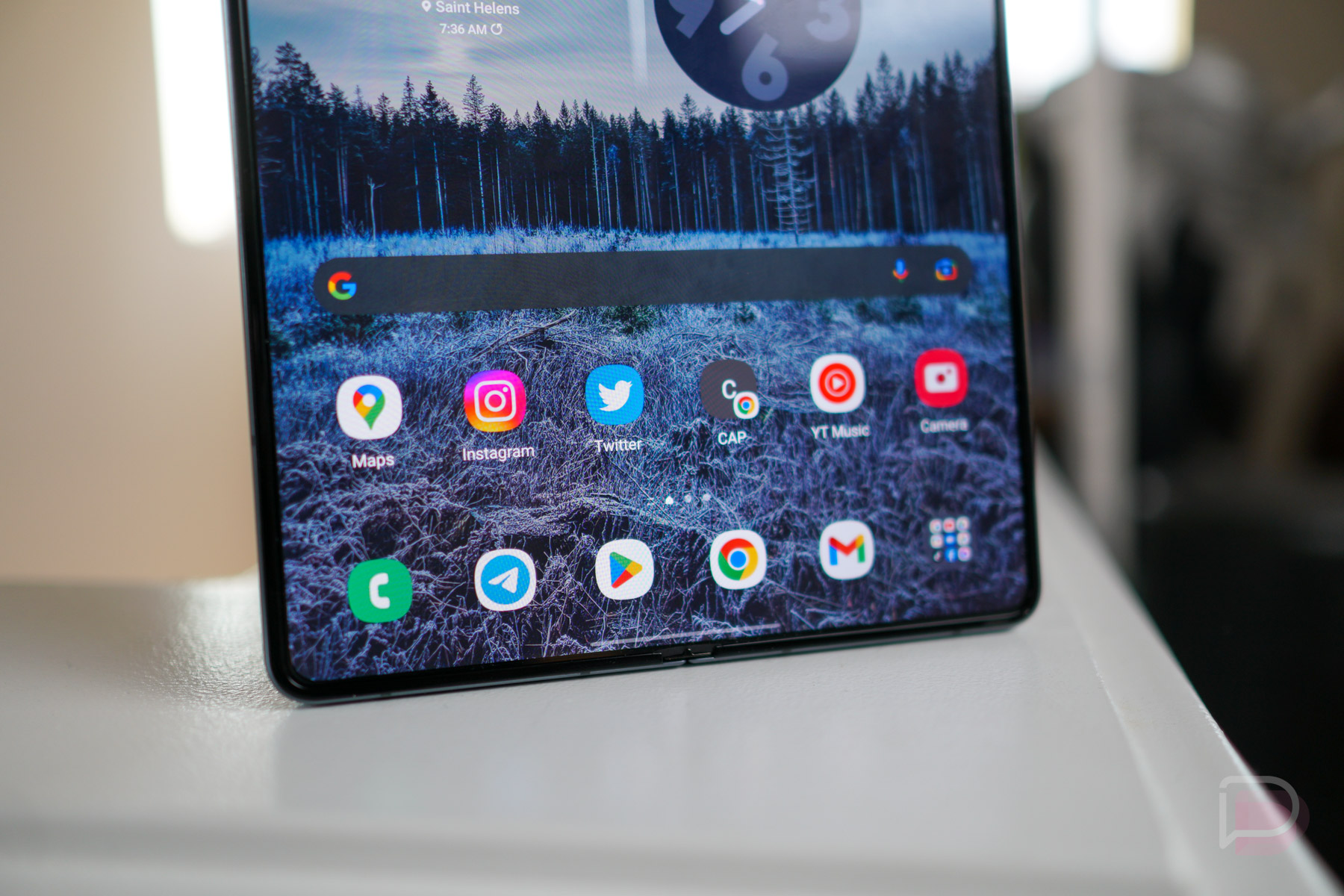 Hardware. While mostly unnoticeable with the eyes, the differences between the Z Fold 4 and last year’s Z Fold 3 can be felt with the hands. For example, the weight on this year’s model is nearly 10g lighter than last year, coming in at 263g versus the Fold 3’s 271g. Additionally, the dimensions of this device are different, with the latest model being a bit shorter and overall more compact in-hand. This makes general usage easier. Again, these aren’t massive changes, but nice little refinements that don’t go completely unnoticed.

The hinge system has also been tweaked yet again, which seems to be an annual thing with these foldable devices. I’d say it’s been improved pretty well, as it feels smooth, but the hinge system on the Fold 3 felt good to me, too. Samsung has mentioned that the updated hinge system is more compact and lighter, which is likely where that weight savings is coming from.

Another change you feel in-hand is the edges of the device itself, with this change related directly to what we saw with the Galaxy S22 line. Samsung has eliminated most rounded edges on these devices, making for a more flat feeling. To me, this hasn’t changed anything from a usage standpoint, but it’s nice to see there’s a good bit of hardware trait similarities between the Galaxy Z and Galaxy S lines.

For the past couple of years, we have called the Galaxy Z Fold line the “ultimate couch phone.” I would say that it still is, but I’ve found myself enjoying it so much more outside of the house thanks to the inclusion of a crossbody bag to my wardrobe. I know, I’m ridiculous, but now that I wear a crossbody I hardly complain about having to lug around the Z Fold 4. It carries my keys, phone, glasses, wallet, and anything else I need. I’m not saying you all need to buy a crossbody to enjoy using this phone, but it certainly can’t hurt. 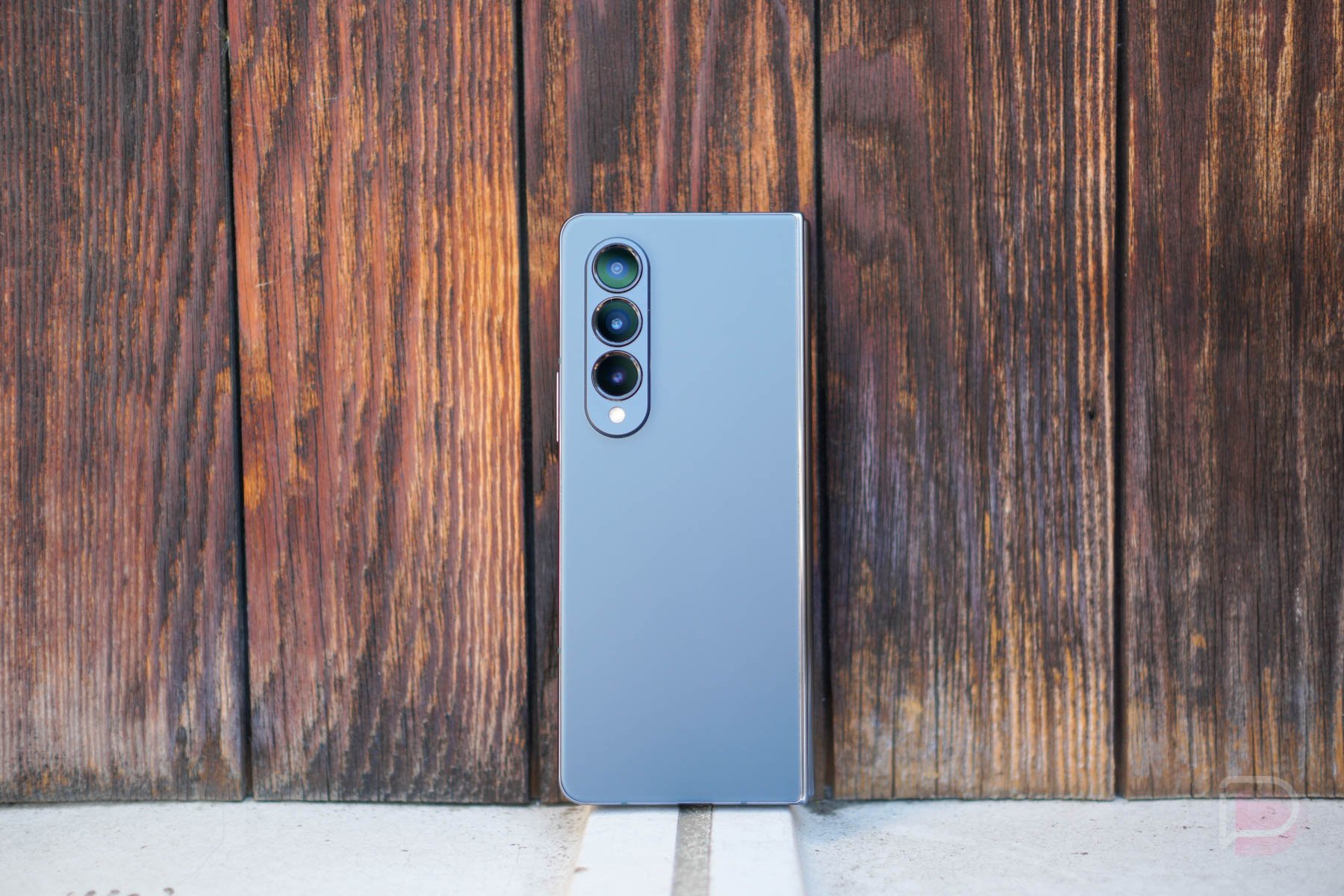 Performance. Thanks to a ton of RAM (12GB) and the latest chipset from Qualcomm (Snapdragon 8+ Gen 1), this phone absolutely crushes what I’ve tossed at it. Being honest, I don’t do much mobile gaming at the moment, but I know it’s been handling my multitasking needs effortlessly. Flipping between apps thanks to the software’s new Taskbar has been so nice, with general app performance doing quite well. I already know that if I needed to download some titles from Google Play or stream something from the cloud, this phone would have zero issues. It’s just not something we need question from these top tier devices at this point.

Software. This is the first device to officially launch with Android 12L. To sum it up, it’s a special Android build designed to take advantage of larger and/or foldable displays. Besides the taskbar (which I’ll get into it), this device has only a few noticeable advantages versus a non-L build of Android 12. For example, certain apps have their controls placed on the left side of the display (Photos, Facebook, etc.) instead of on the bottom. Google originally previewed a reworked notification pulldown with the Android 12L announcement, but this device lacks that currently. Maybe in the future it will come?

I’ve mentioned previously that this phone’s software has really won me over. And this isn’t a general I “love everything” about it, but more of a specific feature that I’ve fallen in love with and I can’t believe it took us this long to get it. It’s called Taskbar and I have to assume it will make its way to the other Galaxy Z Fold devices in future updates. When enabled and the user goes into an app, a taskbar with app shortcuts appears at the bottom of the screen. From here, you can jump directly into other apps, open Multiwindow, as well as access the entire app drawer. It’s ridiculously easy to use, and again, why did this take so long? 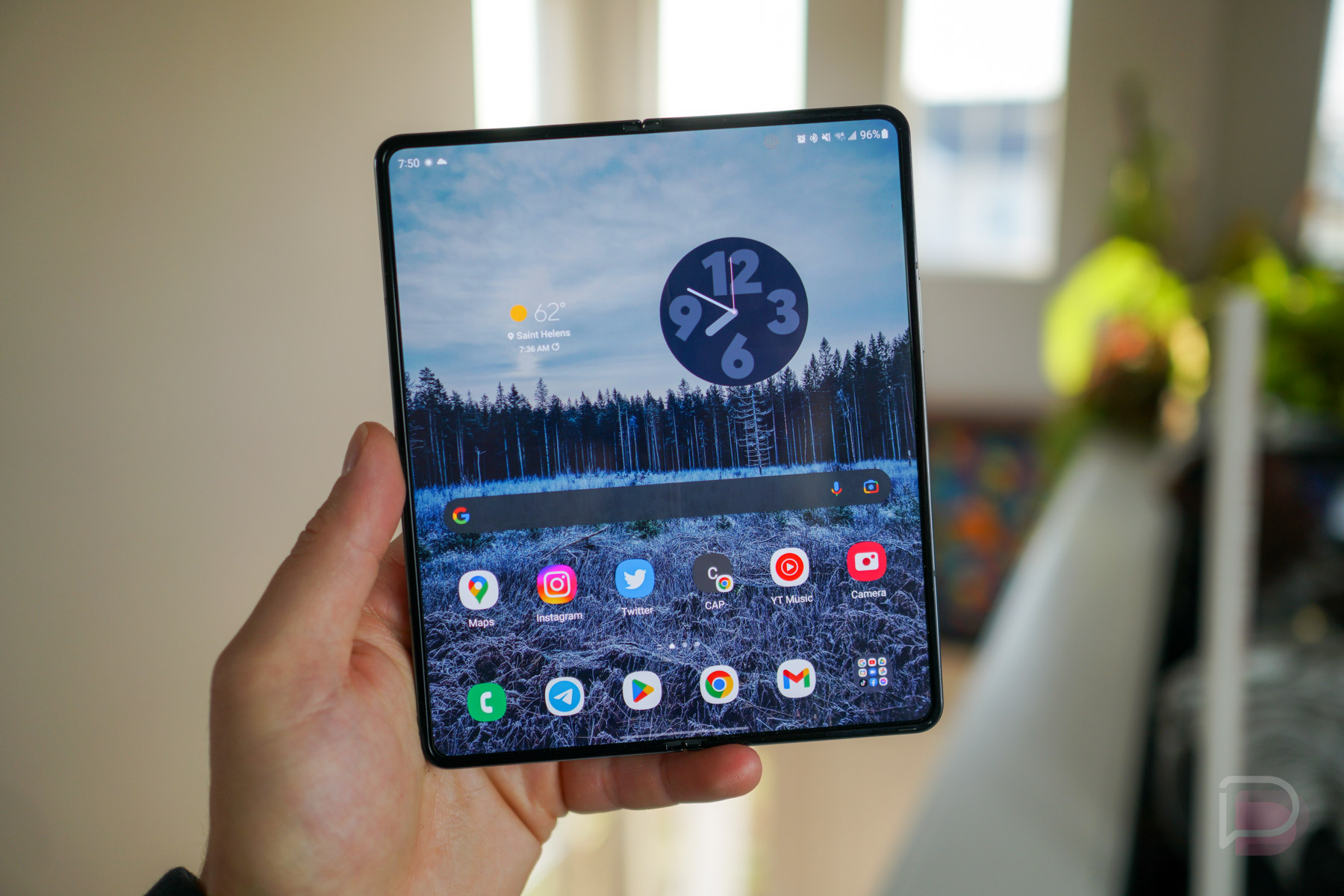 Given this is a Samsung device, you can expect an absolute ton of other software features, too. Edge Panel is still baked in and I still disable it immediately, Samsung Pay is still on board, customization is being taken to new heights thanks to Android 12’s custom color palettes, and the Advanced Features section of the settings menu continues to be packed with a ton of features. This is where you’ll find your Samsung DeX settings, Quick Share, S Pen settings, Gestures, app continuation, plus so much more. It’s settings overload on these devices, but most importantly, Samsung really nails the important stuff like Multi Window and display sectioning. There is so much user control over windows and sizing that having multiple apps open at the same time is actually useful and not just a jumbled mess.

Maybe most importantly, Samsung has promised a lot of software updates for its latest flagship devices. This phone is set to receive 4 years of OS updates, as well as 5 years of security updates. It’s an essentially unrivaled amount of software support from anyone not named Google. 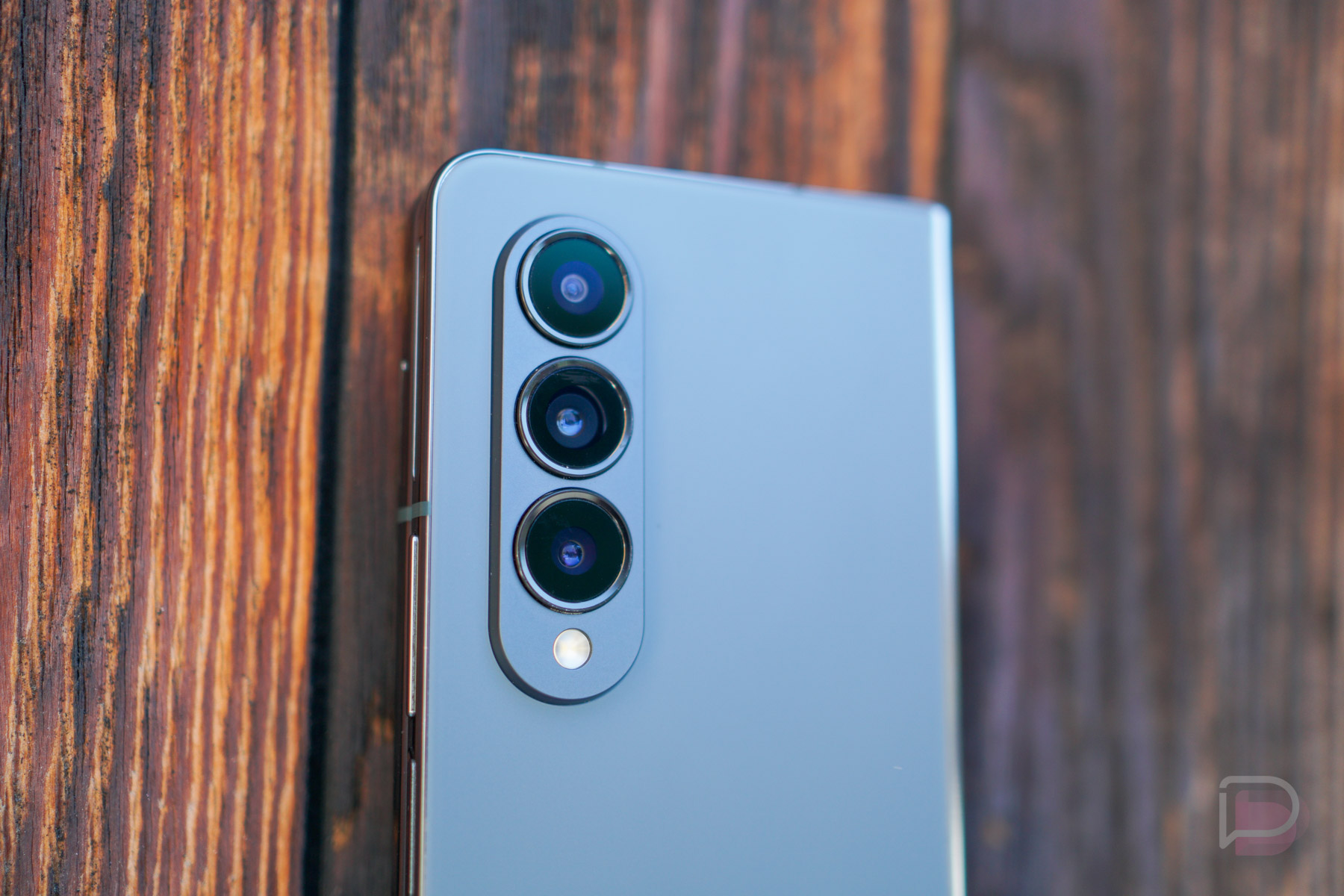 Camera. There is a total of five cameras on this device. Three rear cameras (12MP Ultra Wide, 50MP Main, and 10MP Telephoto), plus two front-facing cameras (cover display camera: 10MP, under display camera: 4MP). One issue I had last year was with the under display camera. To my eye, it stuck out like a sore thumb, but Samsung did a great job hiding it more this year. I hardly notice it. As for the back cameras, which are the important ones, they’re solid. And while the pictures will speak for themselves below, what I will say is that I don’t exactly enjoy taking photos on this device. When it’s closed, the cover display is too small and I have a hard time seeing details in the viewfinder. When it’s open, the screen appears low resolution, leaving details to look muddy and colors lackluster. 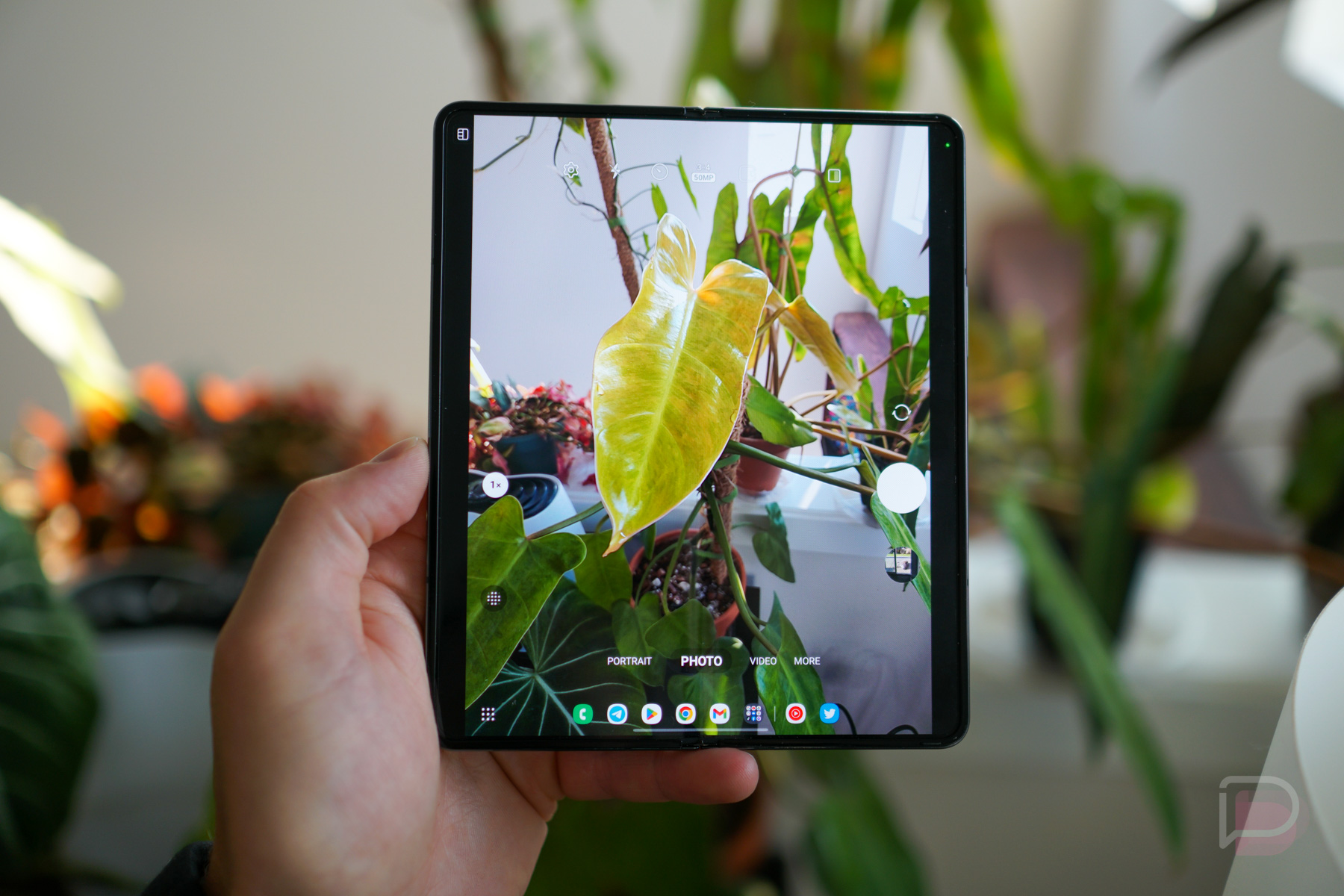 For software, as you’d expect, there is no shortage of goodies. There’s Pro mode, Pro Video, Single Take, Night shooting, Super Slow Mo, Slow Mo, Hyperlapse, Portrait Video, Director’s View (all camera’s simultaneously), and more. For the average bear, it’s ridiculously overkill, and that’s not including the settings for each mode and then the settings menu for the cameras themselves. There’s a lot to look at and tweak, but only if you want to. If you simply pop the camera open and start snapping shots, I think most people will be happy. There’s no “Night Sight” like on the Google Pixels (it has a dedicated night mode, but it’s nowhere near Night Sight), but when it comes to shooting in dark environments or in sunny weather, this phone is more than capable.

Have a look at some samples below. Resized and compressed for the site, but no other edits have been made. 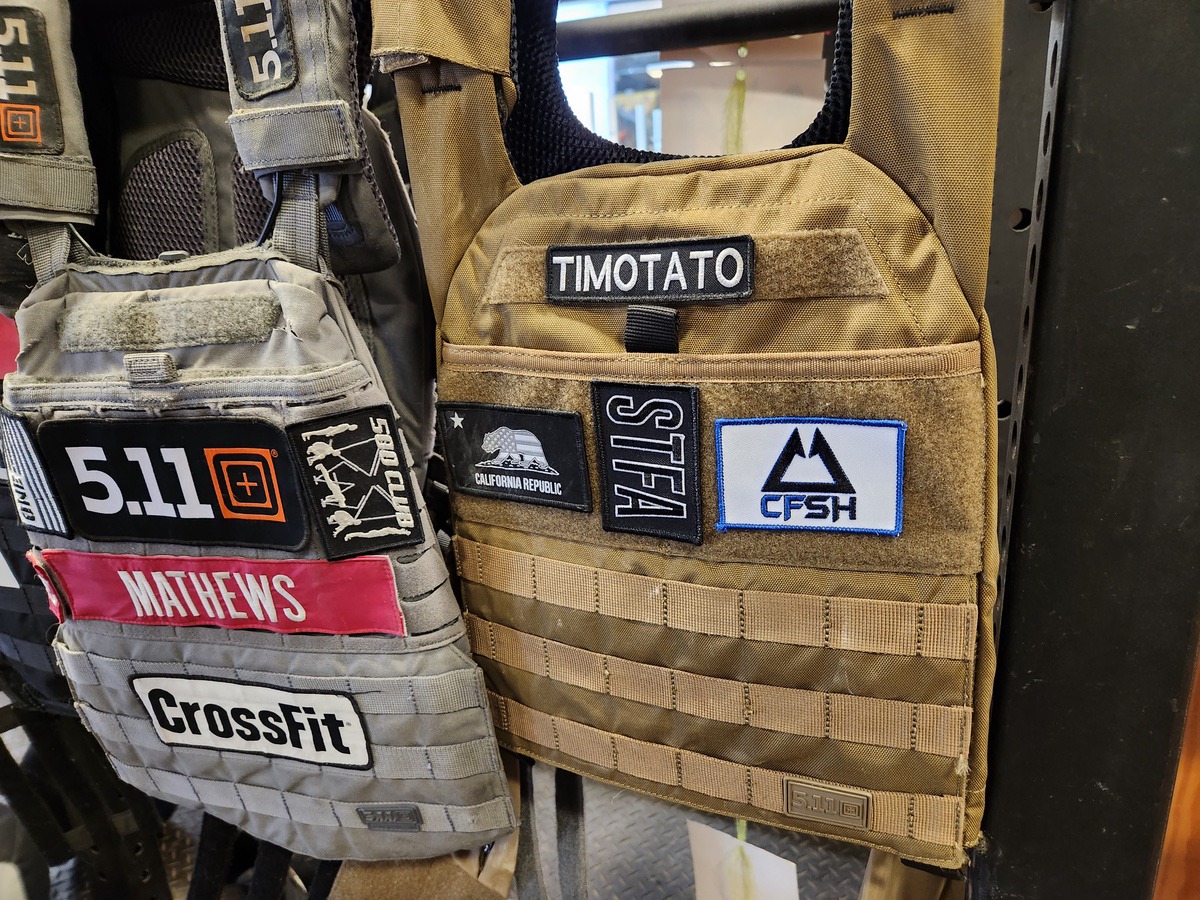 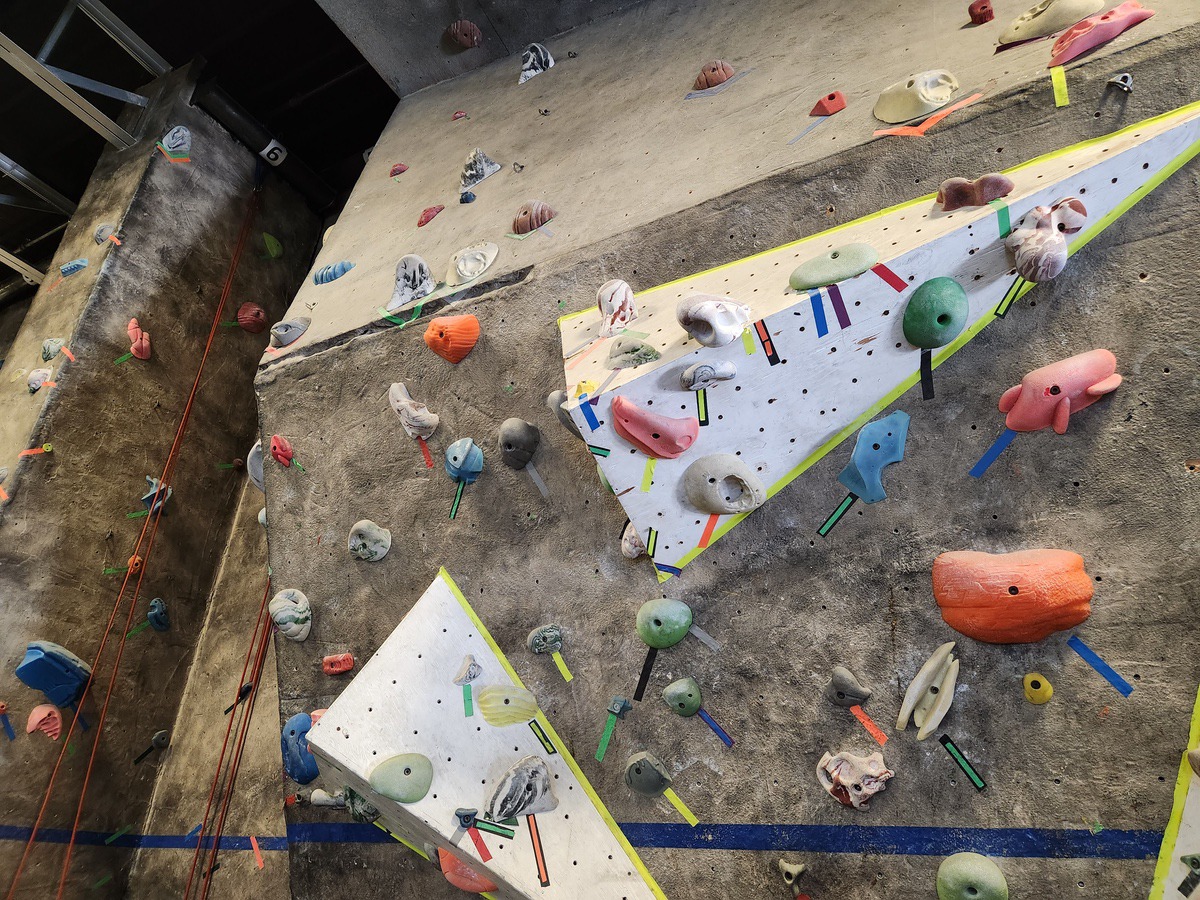 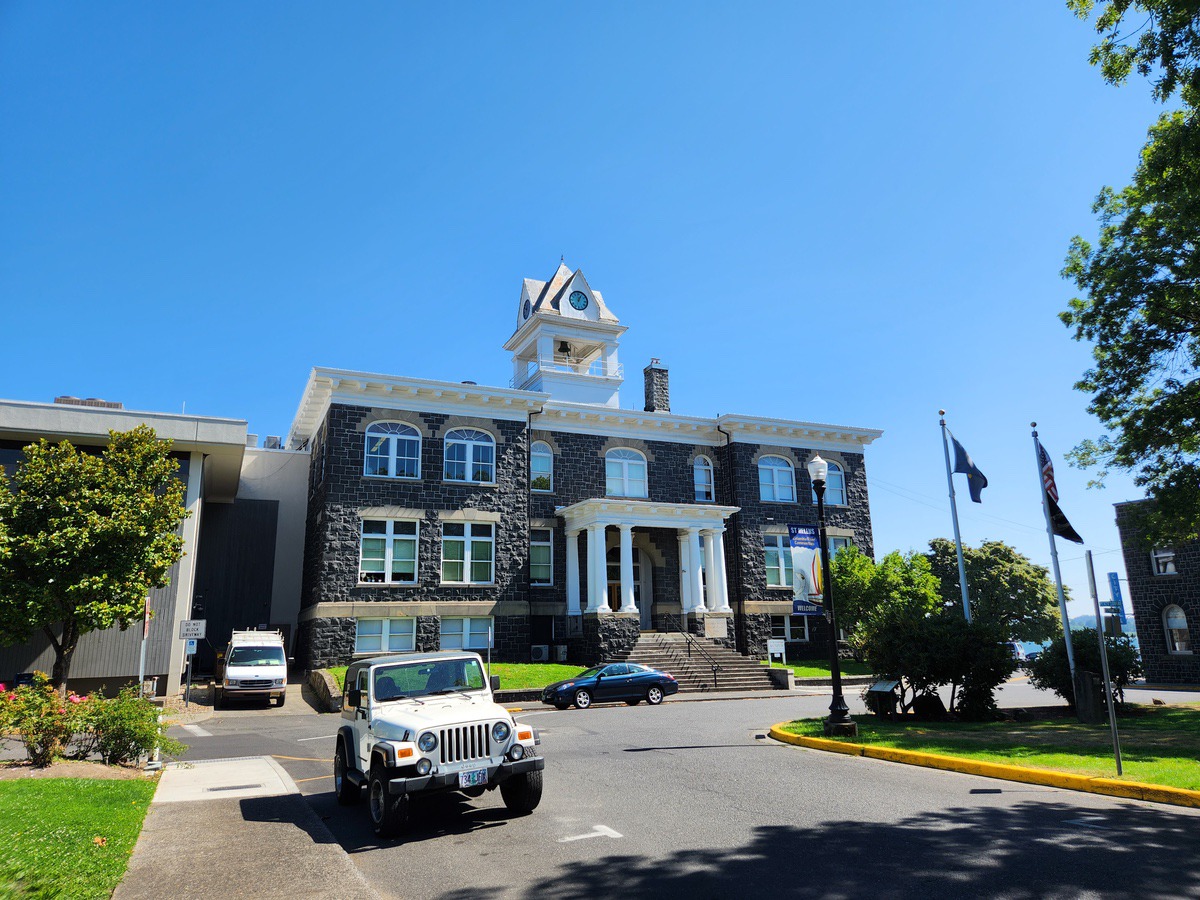 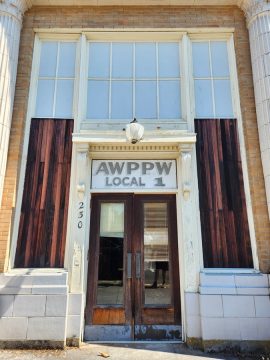 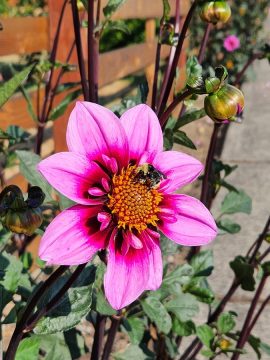 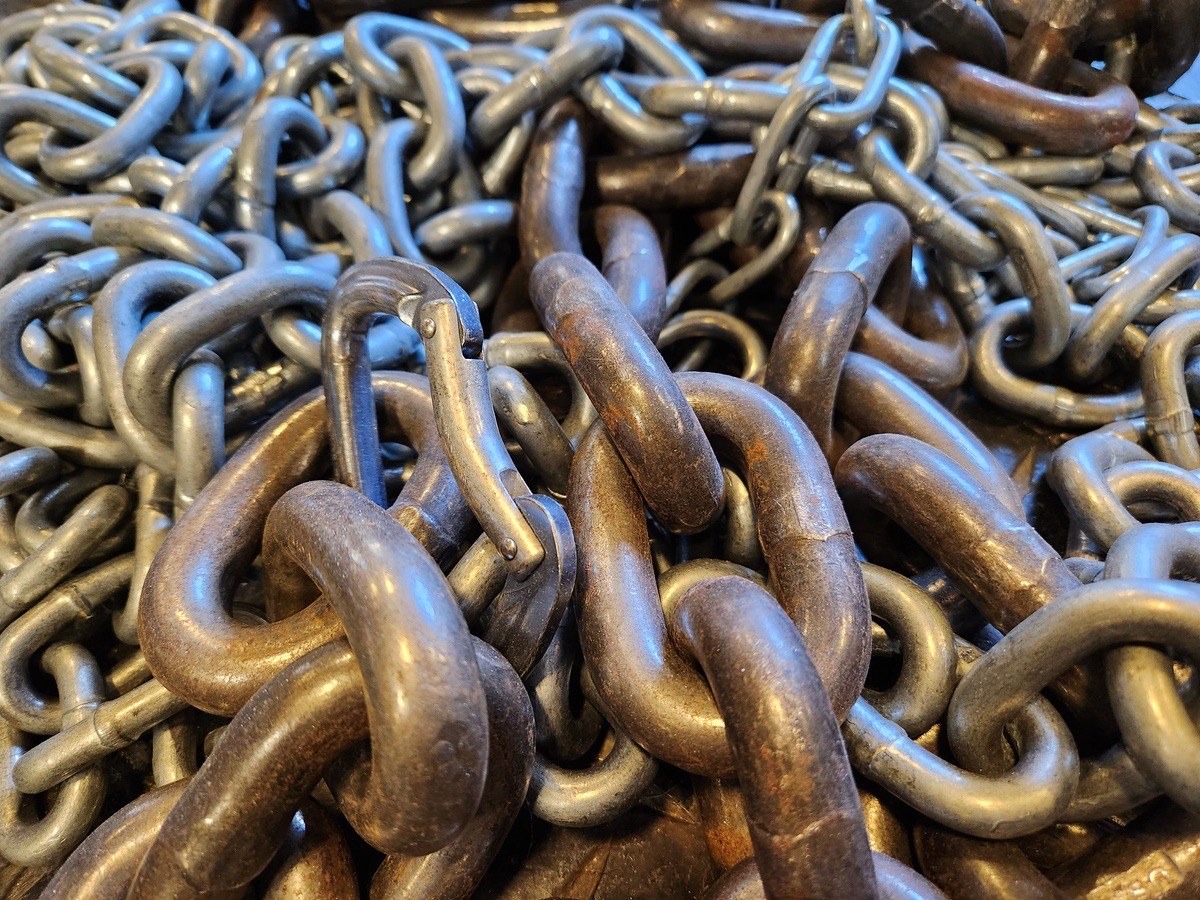 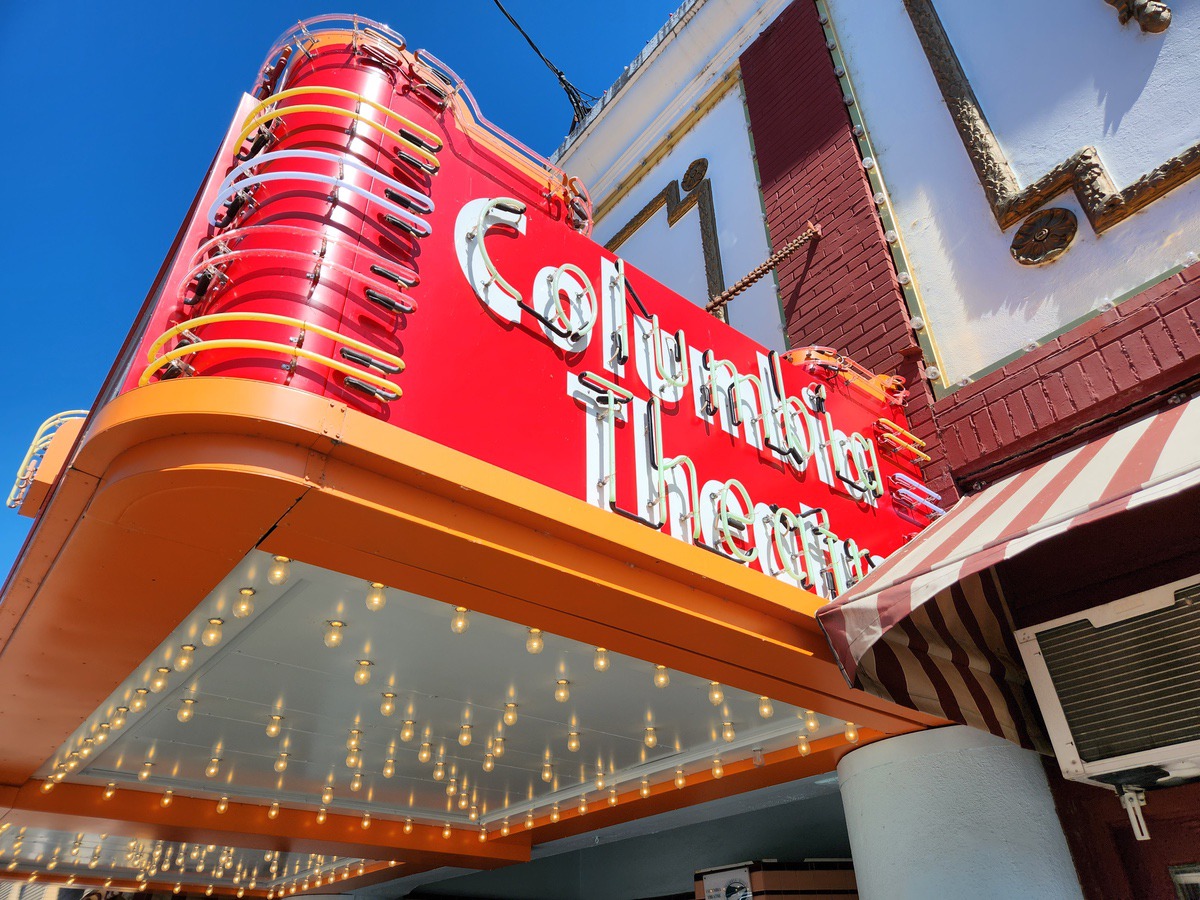 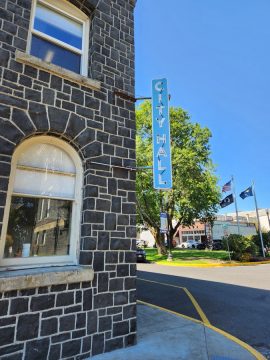 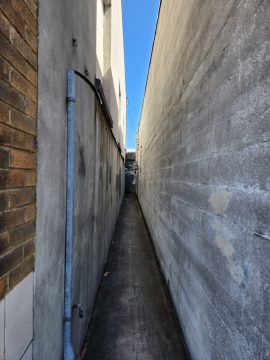 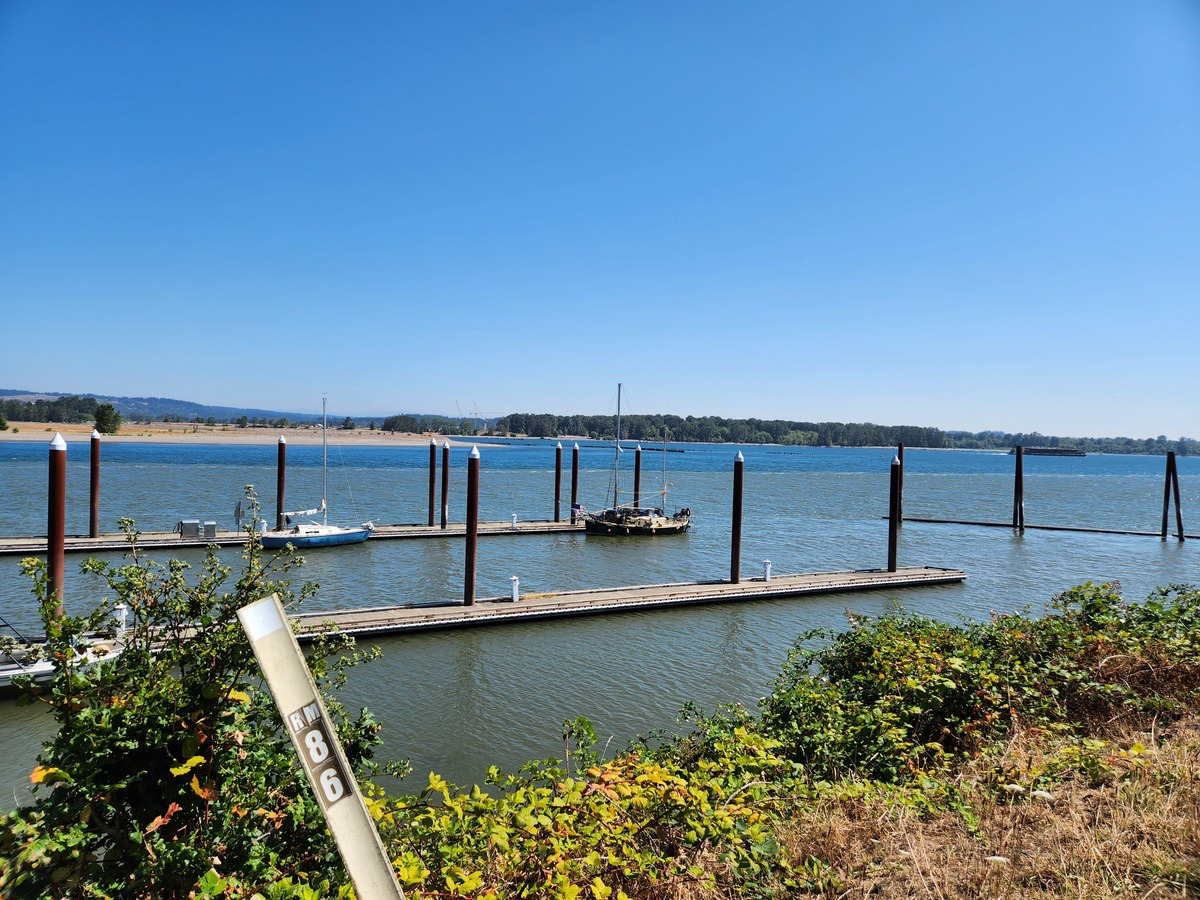 I’m feeling iffy about the…

Battery. Galaxy Z Fold 4 packs a 4,400mAh battery, which isn’t the biggest battery on the block, but it has gotten the job done for me. No, you won’t get two days of battery life from it, but it will get you through a solid day of good usage. My usage is mostly a lot of Chrome, TikTok, YouTube and Twitter, plus I’ve had a Galaxy Watch 5 or a Watch 5 Pro connected via Bluetooth most of the time. And while it’s been fine for me, I would label my usage somewhat light compared to what others are likely to do with this device.

It’s made to be used in all sorts of battery draining ways, so to me, there’s no doubt that the device would benefit from a larger battery. Just to give you an idea, I wake up at 7am and take it off the charger, then plug back in around 10-11pm at night. By then I’m usually well under 20% battery and have an average of 3-4 hours of screen on time. It’s hard to say whether that will be good enough for different people, but what I can attest to is that it was good enough for me. 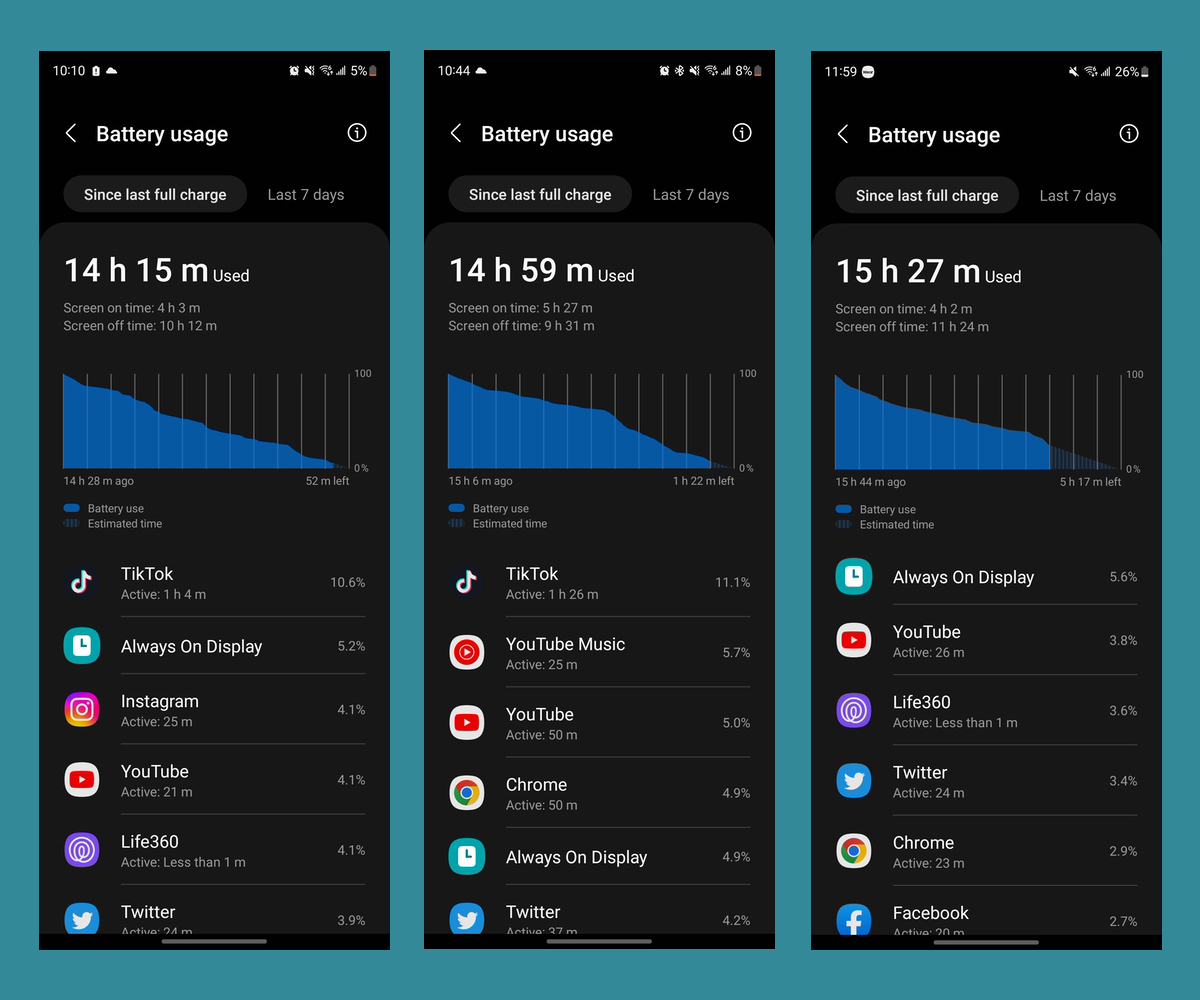 S Pen. The S Pen (Fold Edition) works on this device, just like last year’s. And again, I barely used it. I tried it for about 5 minutes and never picked it back up. I’m not a digital artist, so painting doesn’t intrigue me, plus I also don’t need it for taking a lot of notes. Do I think it’s awesome that it’s supported? Absolutely! Do I think it’s silly that it’s a standalone thing and doesn’t attach to the device in some way to make it less of an afterthought unless I have a big hunky case? Absolutely! If you’re not new to Droid Life, then you already know how we feel about the S Pen. It’s cool, but we just don’t use it. Sorry.

First 10 Things to Do

Should you buy the Galaxy Z Fold 4?

If you have the means to afford a device like the Galaxy Z Fold 4 ($1799), and you don’t mind its at times cumbersome design, then it’s a definite “Go” from me. This is Samsung’s best foldable yet, with the improvements to the hardware and software at the top of my love list. There’s seriously never been a better time to want a foldable device, with devices such as this and the Galaxy Z Flip 4 hitting the market. Take the plunge, because I think you’ll like the waters.

US Open 2022: Bopanna, Ramanathan crash out of US Open