Samsung introduced a new branding of device into its wearable family this year, with the Galaxy Watch 5 Pro taking the place of what we assume would’ve been the Galaxy Watch 5 Classic. Personally, the Classic moniker never really quite got the point across that it was better than the non-Classic version, so this Pro branding was a really smart move. Does the Galaxy Watch 5 Pro live up to that Pro name, though? I’ve been wearing it now for a solid few weeks and have some thoughts to share.

This is our Galaxy Watch 5 Pro review. 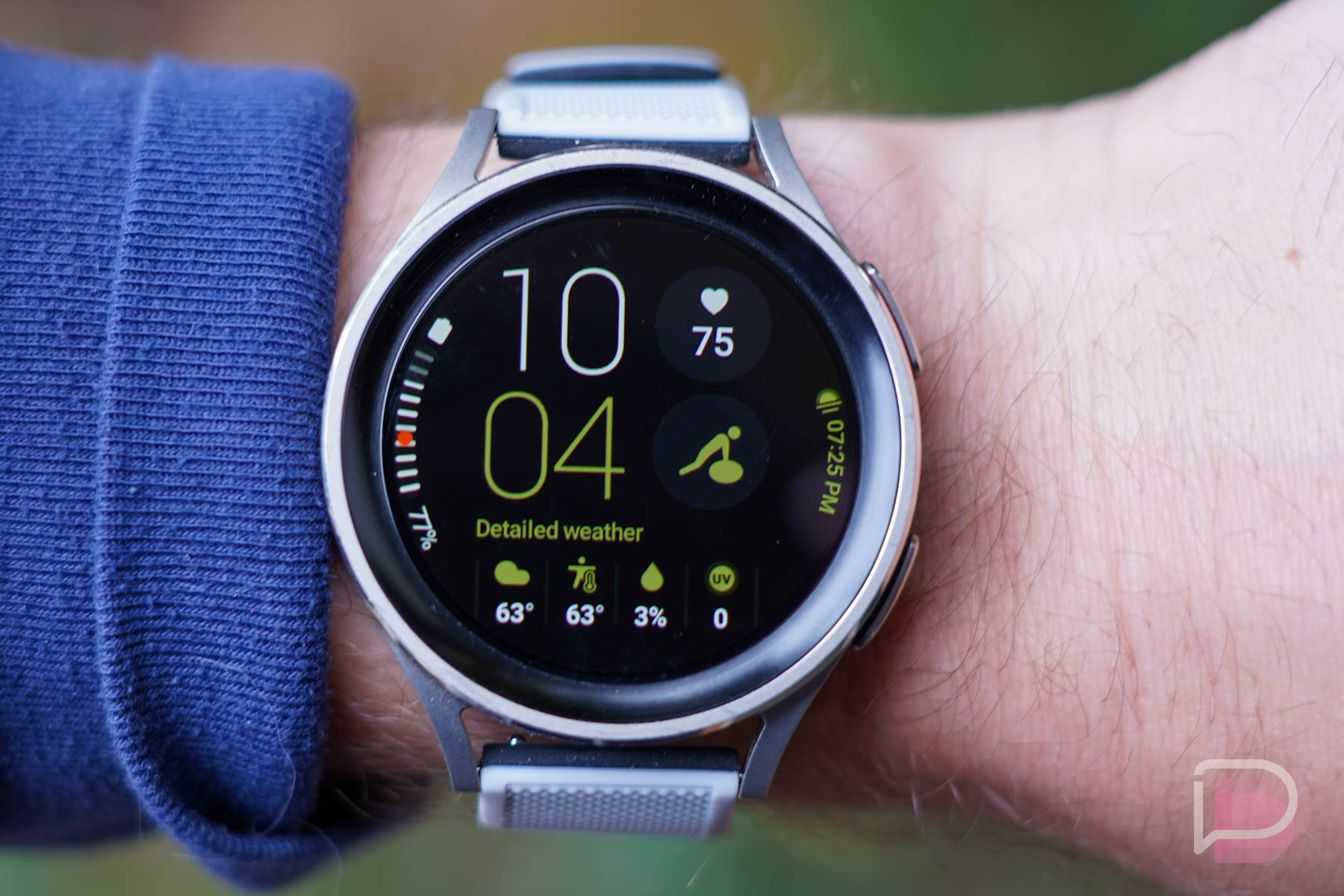 Samsung’s Watch 5 Pro features a 1.4-inch Super AMOLED display with a resolution of 450 x 450 (~321 ppi). It’s protected by a layer of sapphire crystal and does support Always On display. Let me start by saying that it’s important for smartwatches to have a good display in all sorts of lighting conditions.

From my experience, this Watch 5 Pro has one of the best displays I’ve used on a Wear OS-powered device. It can get exceptionally bright for when in direct sun viewing, but can also get plenty dark when you need it to be. What I have appreciated is the device’s ambient sensors, which automatically set the display’s brightness and do a really good job at it. I haven’t had to manually manipulate the screen’s brightness at all in my time wearing this device, as it always seems to be set at the right levels for my surroundings. I love when a smart device is actually smart like that.

The colors on the device are also great, usually highlighted by whatever watch face I’m using. I don’t do much photo viewing or multimedia consumption on a watch, so I don’t think about contrast levels or white balance as much as I would on a smartphone display, but I’ve thoroughly enjoyed looking at the Watch 5 Pro. It’s a great display. 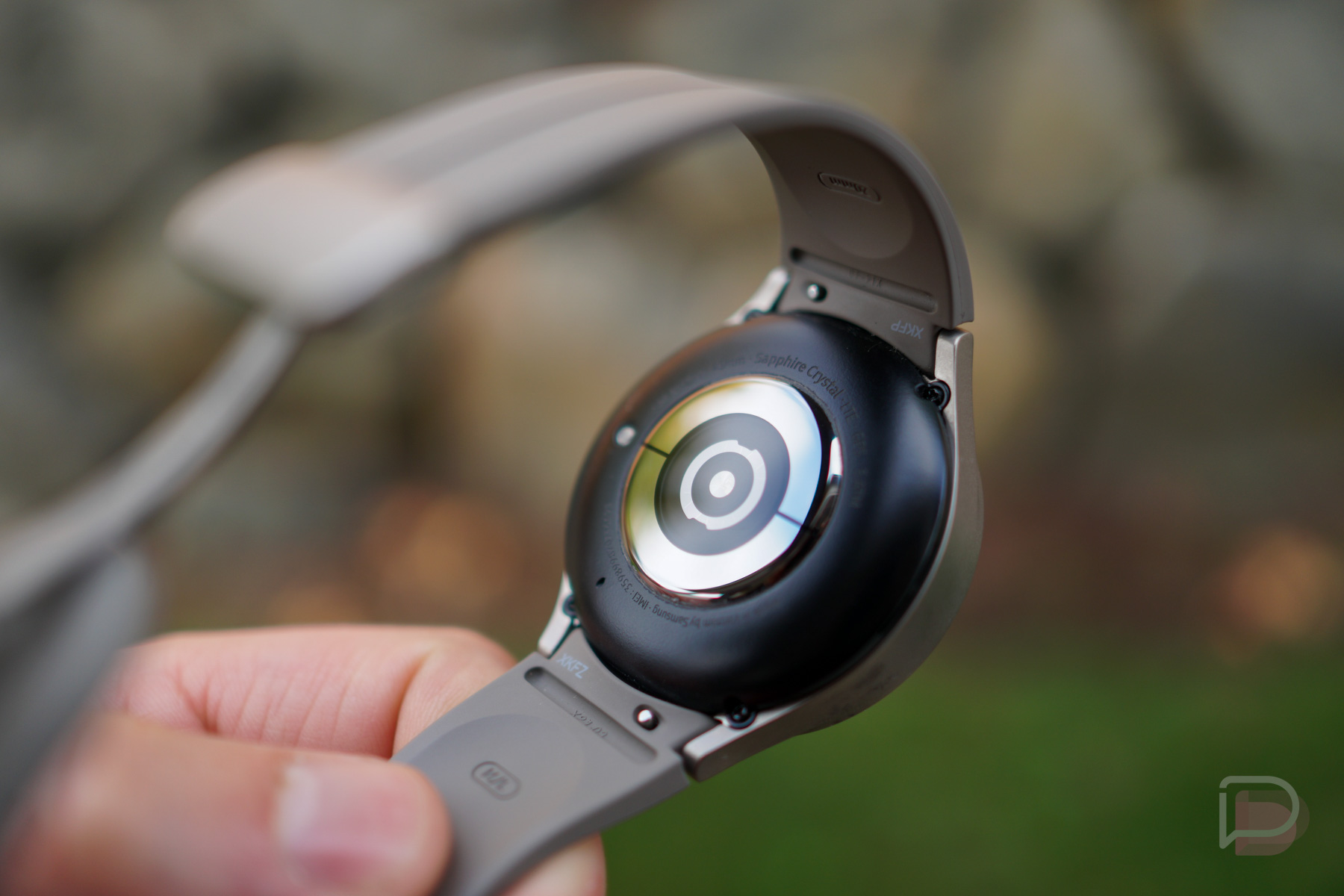 Full transparency, I haven’t enjoyed using smartwatches until somewhat recently, simply because they always seemed to perform very poorly. Even navigating menus on older watches was frustrating due to a lack of smoothness. Today’s smartwatches are much different, thanks to what seems to be years of tweaking by Google and partners, plus the introduction of more RAM and better chipsets for these devices. It’s 2022 and these devices are finally performing the way I feel that they should.

This Galaxy Watch 5 Pro is a perfect example of what I want from a watch. I want my interactions to be quick and smooth, with the Watch 5 Pro’s dual core Exynos W920 and 1.5GB of RAM delivering just that. Whether I’m quickly scrolling through my tiles of information or jumping inside of an app, this watch always feels snappy and while I sometimes say that you can’t put a price on great performance, you apparently can at $449+. Yeah, sure, there are less expensive devices that may perform similar to this, but from my experience, this is one of the better performing Wear OS watches that I’ve ever worn. 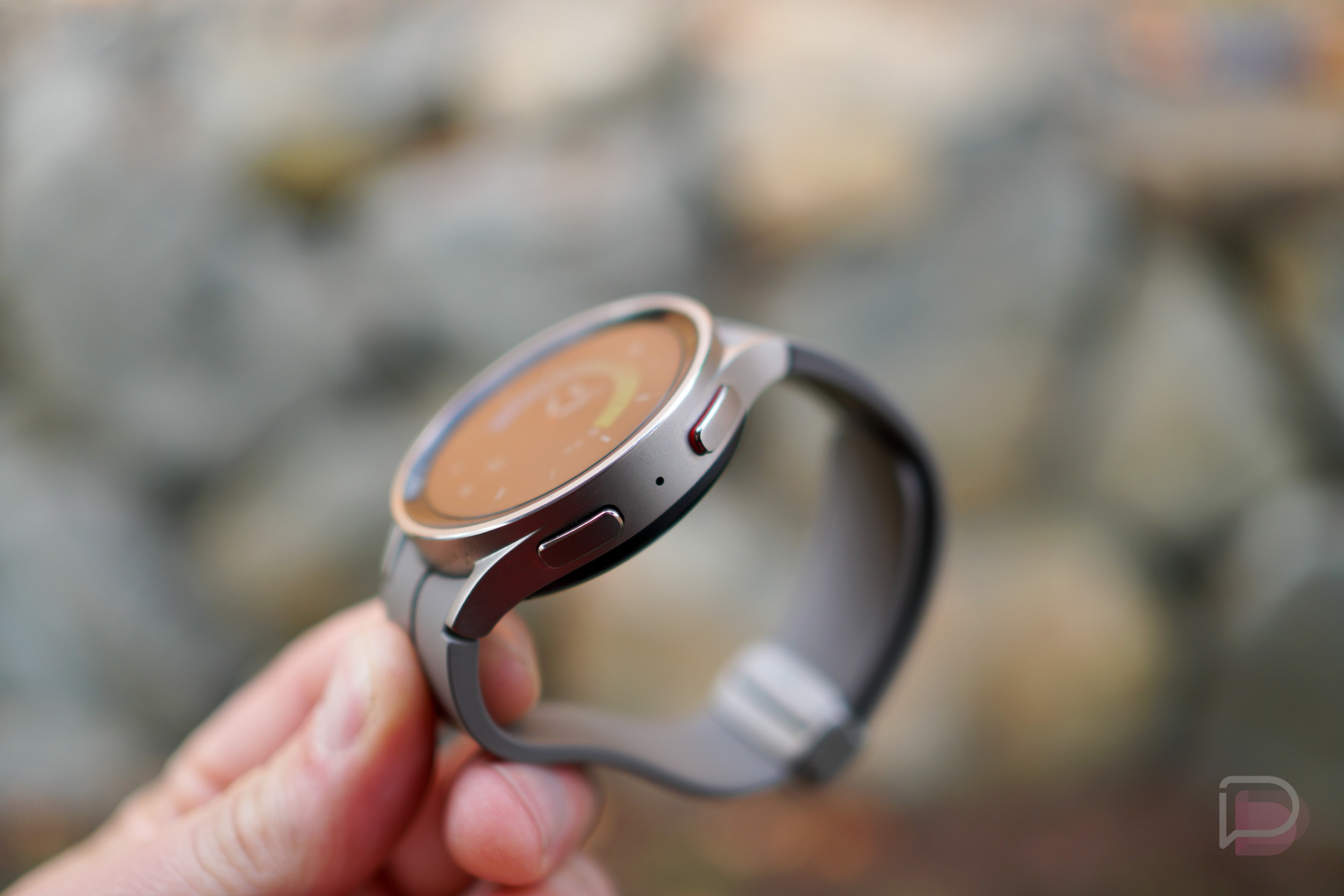 My top favorite aspect of this device is the hardware. Well, the battery is high up there, too, but the hardware just feels so good and so solid. It’s relatively heavy, coming in at 46.5 grams, but that must be thanks to its large battery (590mAh) and titanium body. It’s a handsome watch with traditional styling, plus the magnetic band feels great when on wrist. I can also attest to the watch’s durability. I’ve given it a few good swipes and bumps, but the watch shows no signs of damage. The two hardware buttons function great and have a nice feel to them when pressed, plus I haven’t yet had any major issues with all of the sensors or onboard GPS. I’ve worn the watch for plenty of workouts and the heart rate tracking seems really dialed in, though, I refuse to wear this monster while sleeping. I don’t know how people do that with big watches. I did test the GPS’s track back feature on a hike and it seemed to work just fine the second go around, which was after an initial crash on my first attempt.

Overall, I’m really happy with the hardware and just to highlight one more thing that I know we won’t get with the Pixel Watch, this Galaxy Watch 5 Pro allows me to use any band I want for personal styling. The Pixel Watch will not as it will feature proprietary band options. That’s such an Apple thing and I thought maybe most Android companies had figured that out, but I suppose not. 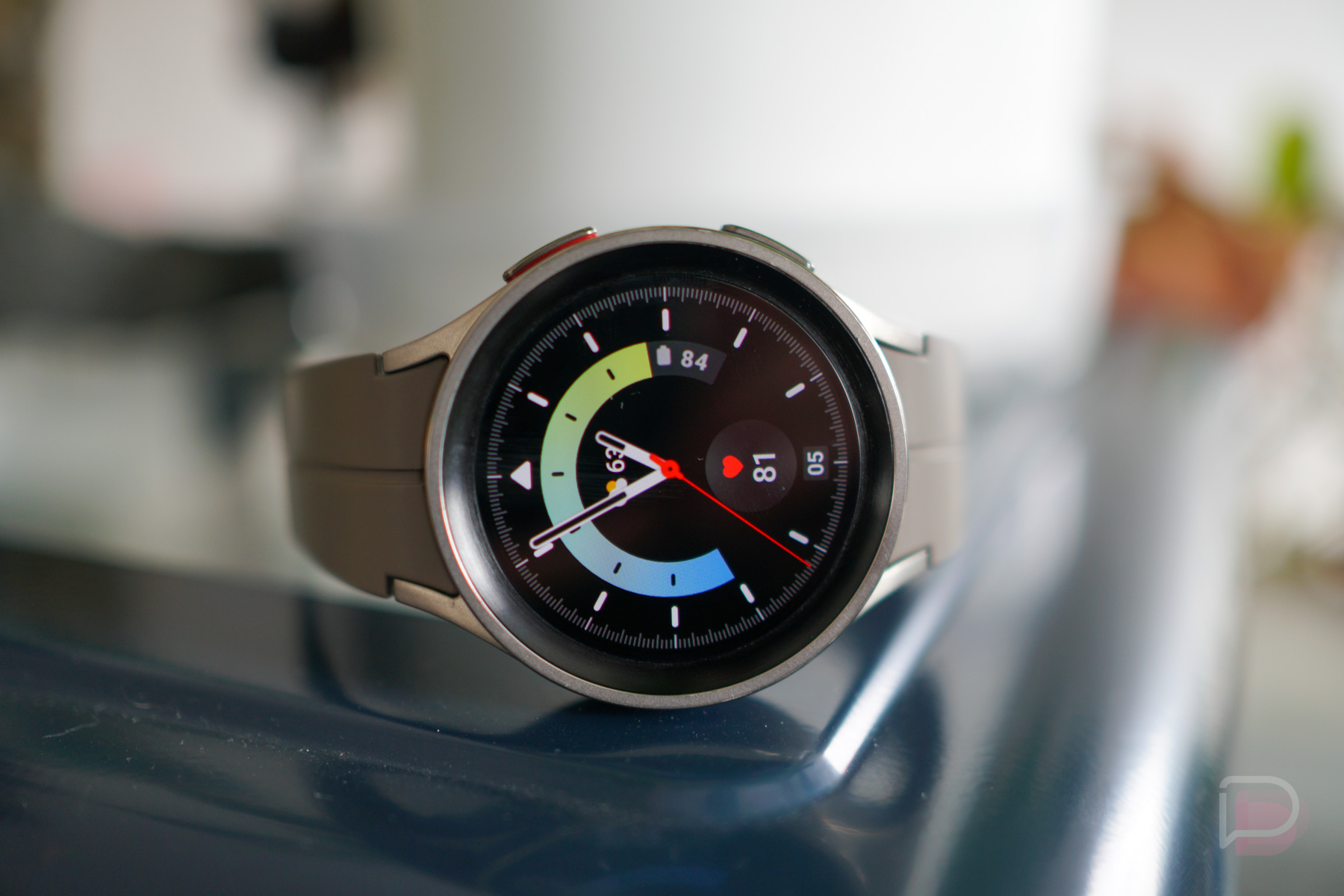 I did mention that the hardware is my favorite thing about the Galaxy Watch 5 Pro, but right behind the hardware is the battery life. Good lord, this thing lasts for days. I am consistently getting 3 days of juice from the Watch 5 Pro, but it is dependent on how much fitness tracking I do and if I’m requiring GPS or not. If you wear the watch and use it for notification checking and control music playback on your phone, you’ll get days of life, no problem. When I use it for workout tracking for 2+ hours a day, I can get about a day and a half to two days. If you use it for running and there’s a lot of GPS usage, you may find that a lot of battery is used. It’s silly to say that your battery life will vary based on how you use it, but yeah, that’s the case for all things in this industry. Having experienced a few Wear OS watches in my day, there’s absolutely no doubt that the Galaxy Watch 5 Pro has the best battery life of any watch I’ve ever used and it’s not even close.

Samsung returned to Wear OS last year with the Galaxy Watch 4 lineup, with a special blend of One UI running on top. It’s the same thing this year, with Wear OS being a base for everything, but then Samsung’s skin running on top. I quite like what Wear OS has become, being more than just an extended notification panel for your smartphone.

The layout is simple enough: You have your main screen that you can tweak an infinite number of ways and add/remove complications for tracking certain things, then you have tiles off to the right for things like weather, health tracking, apps (YouTube Music, Spotify, etc.), ECG, stress levels, and much more. If you pull down from the top, you can access system toggles just like on an Android phone, plus a swipe up brings up the app drawer. Because this matches an Android phone, it’s easy enough for anybody to pick up and use should they have even the most basic understanding of the Android user experience. 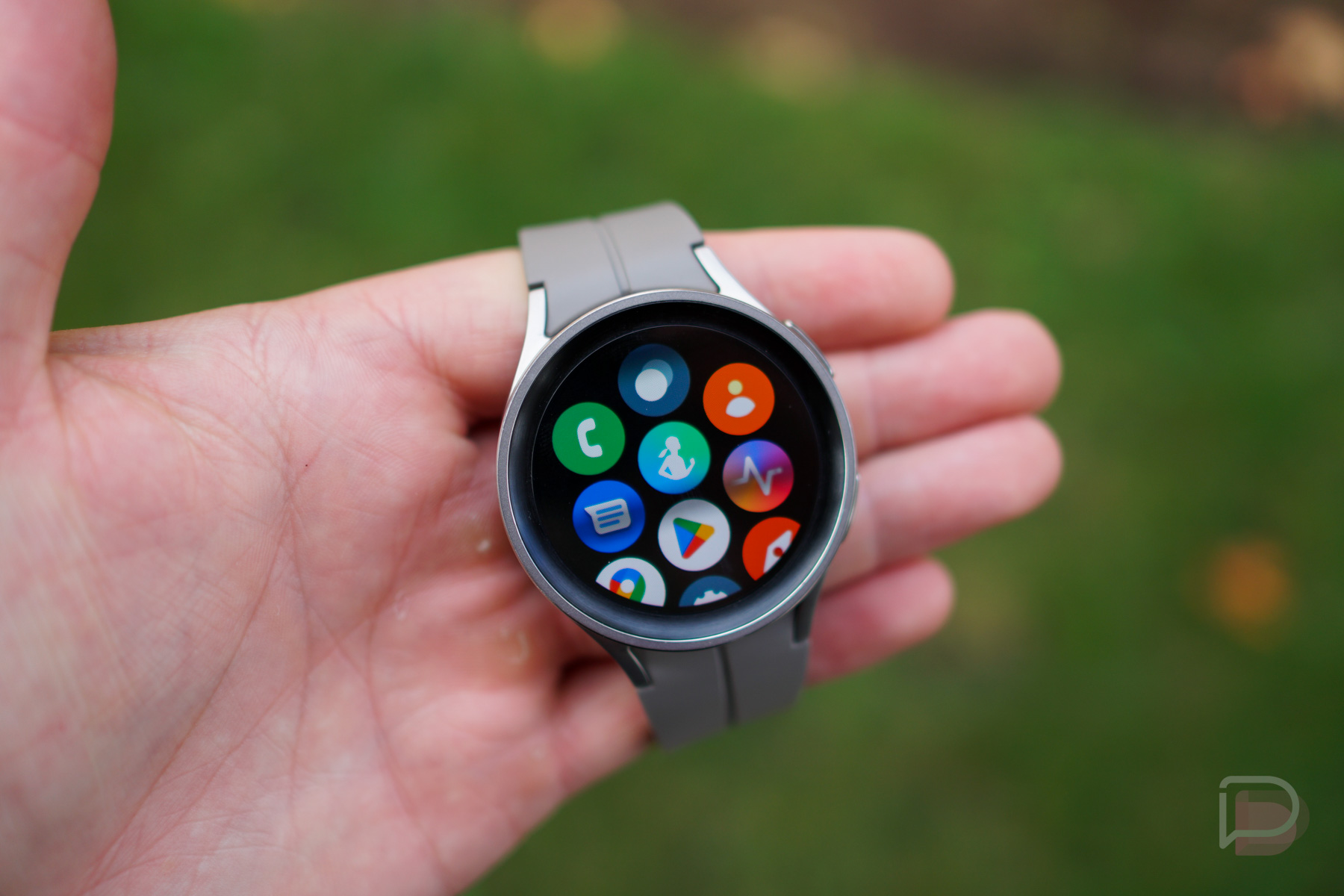 And with Wear OS comes Google Play and access to plenty of apps. While I don’t personally download a ton of various apps because my usage is somewhat plain, I do appreciate the variety of apps we all have access to. Whether it be golfing apps, map tracking apps, finance apps, and everything in between, I think Samsung’s re-adoption of Wear OS has been a big blessing for users. There’s more cohesion in the ecosystem, which is important when you’re attempting to stave off Apple’s complete dominance in the US market. While having access to apps is always great, I would say that the apps themselves could still use a bit more polish. When scrolling through Google Play on the watch, it seems the average Wear OS app rating is somewhere around 3 stars, which means that many leave a bit to be desired. I’ve experienced this myself with the YouTube Music app. Personally, I think it’s hot garbage mostly, many times becoming unresponsive when I try to interact with it. When you’re in the middle of a run, the last thing you need is for your watch and music to stop working, so I’ve been left frustrated a few times with it. I don’t blame the watch, though, I blame the janky app.

The Galaxy Watch 5 Pro super expensive at $450 for the WiFi model ($499 for the cellular version), but it’s honestly one of, if not the best option out there for Wear OS buyers. The hardware feels exceptional, the software is increasingly polished over other experiences, and the battery life is unmatched by other Android smartwatches. Typically, I wear a Wear OS watch for a couple weeks, review it, then put it back in the box. That’s not the case for the Galaxy Watch 5 Pro. I will be using this thing for quite some time, that is until it’s time to test the Pixel Watch. I pretty much know what to expect from that device already, so my gut feeling is telling me that I’ll be wearing the Galaxy Watch 5 Pro again in no time. If you pick up this watch from Samsung, I bet you’ll feel the same way, too.