READ ALSO: Tyson Fury vs Derek Chisora 3: Who Is the Better Knockout Artist Between Fury and Chisora?

Explosive heavyweight and WBA regular champion Daniel Dubois takes on South African Kevin Lerena in the co-main event. There is a lot of hype surrounding both fighters. Dubois comes into the bout as the favorite, but Lerena comes into the bout on the back of a 17-fight win streak.

We predict a close bout with both fighters proving their worth on the big stage. However, we think Dubois will rise to the occasion and give Lerena his second career loss with a TKO in round 9. But it will be no surprise if Larena surprises everyone and gets the win. 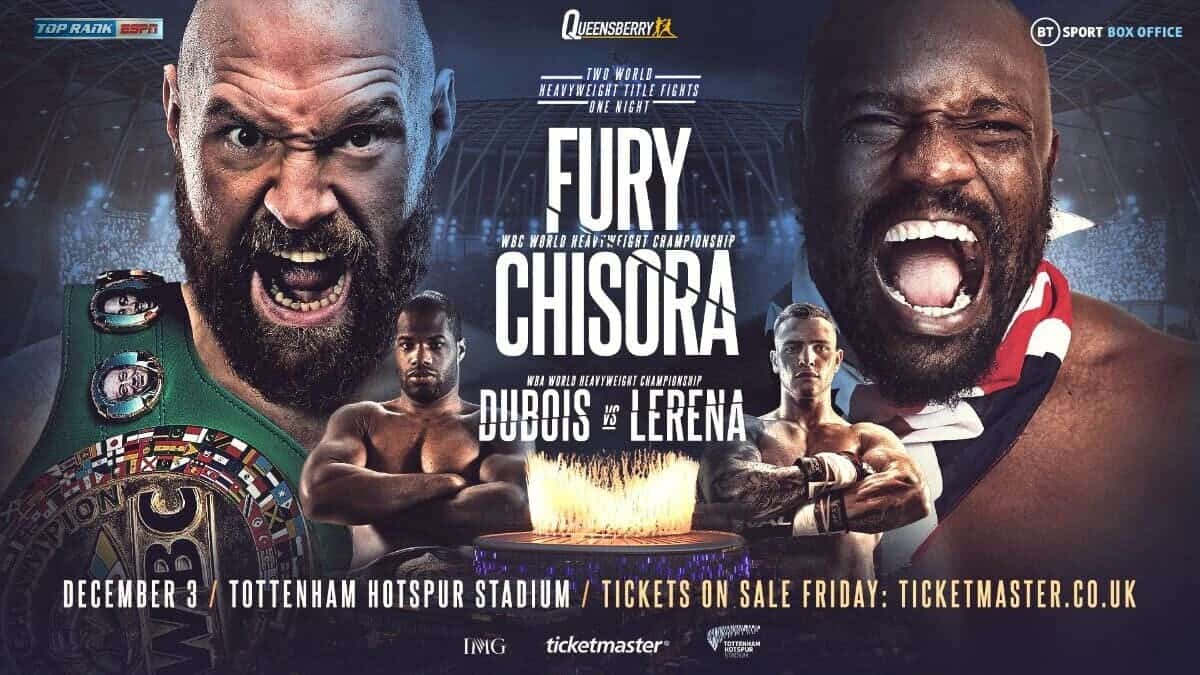 Another fun contest on the undercard is the lightweight battle between Yvan Mendy and Denys Berinchyk. Mendy will enter the ring on a 7-fight win streak, while Berinchyk is undefeated with 16 straight fights.

We predict Berinchyk to continue his unbeaten record with a seventeenth straight victory. While Mendy will use his experience to his advantage, we believe Berinchyk will do enough and win via a decision.

Light-heavyweights Karol Itauma and Vladimir Belujsky will also feature on the Tyson Fury vs Derek Chisora 3 card. Itauma is undefeated in his eight professional bouts, while Belujsky has won five of his last seven.

Itauma will want to continue his unbeaten record, while Belujsky will want to bounce back. Therefore, it could be interesting. However, we are going with Karol Itauma to get a sixth-round TKO.

Super-featherweights Isaac Lowe and Sandeep Singh Bhatti also feature on the Tyson Fury vs Derek Chisora 3 card. Both fighters have had mixed luck in their last few fights and will want to set the records straight.

While the Indian Bhatti is inexperienced, he is very capable of causing an upset. However, we don’t see him beating the experienced Lowe. Despite two defeats in his last two fights, we predict Lowe to knock out Bhatti in the fourth round.

The second fight on the card features a lightweight contest between Royston Barney Smith and Cruz Perez. Both fighters are inexperienced in their professional career with three wins a piece.

While both Smith and Perez are relatively unknown, this is a chance for them to prove themselves. We predict a close fight initially, but Smith will step on it after the second round and get a fourth-round TKO.

The card kicks off with Tyson Fury’s cousin Hosea Burton taking on Reinis Porozovs. Both cruiserweights will aim to get the card underway with an electric fight. And while Porozovs is more experienced, Burton has a better record.

We predict Burton to get the win over Porozovs. While Porozovs will be dangerous early on, we think Burton will do enough to get the win with an easy third-round TKO.

What do you make of the Tyson Fury vs Derek Chisora 3 undercard? Let us know your predictions for the fights.

India Tour of England: Mayank to be added to squad, Rishabh to be named vice-captain: Follow Live