Naresh Kumar Death : Naresh Kumar Dies : Naresh Kumar, who famously mentored a young Leander Paes as India’s Davis Cup captain, has passed away. He was 93. He is survived by his wife Sunita, son Arjun, and two daughters — Gita and Preah.  Follow Tennis news updates on InsideSport.IN

“He was suffering from age-related issues since last week. I was told that his chance of survival was not very good. I’ve lost a great mentor,”Jaidip  Mukerjea, who made his Davis Cup debut under the Kumar’s captaincy, told PTI. 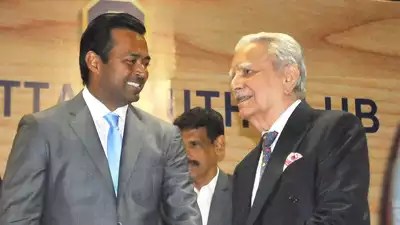 Born on December 22, 1928 in Lahore in the undivided India, Kumar began his journey with tennis at the Asian Championships in 1949 before ruling the Indian tennis along with Ramanathan Krishnan for close to a decade in the 1950s. His Davis Cup journey started in 1952 and went on to captain the side.

Three years later his biggest career high came when he made the fourth round of Wimbledon in 1955 before losing to the eventual champion and American No. 1 Tony Trabert. As an amateur, Naresh Kumar has played a record number of 101 Wimbledon matches. He won five singles titles in his career — Irish Championships (1952 and 1953), Welsh Championships (1952), Essex Championships at Frinton-on-Sea (1957) and his title at the Wengen tournament in Switzerland the next year.

He played his final tournament at the Asian Championships in 1969. In 1990, Kumar as a non-playing Indian captain played a key role in including a 16-year-old Leander Paes in the Davis Cup team in their match against Japan and the rest, as they say, is history. Naresh Kumar, clad in white trousers and T-shirts, was a calming influence during some great Davis Cup years.

An emotional Kumar ambling towards Leander Paes to hug him after his iconic fifth rubber win against France in Davis Cup quarter-final in Frejus (France) while Atul Premanarayan calling the moment for Doordarshan, would remain a fond memory for all tennis lovers. A recipient of Arjuna Award, Naresh Kumar became the first tennis coach to receive Dronacharya Lifetime Achievement Award
in 2000.

“The best teachers teach from the heart and not from the book — Sir Naresh Kumar was my first Davis Cup captain and his
wisdom has been the beacon of light in my journey,” Paes had said after his ‘Uncle Naresh’ got the Dronacharya. “A guru, a mentor and a confidante, he gave me the wings to fly and stoked my passion to play for our country.

I have come a long way in 30 years yet what my Guru, Naresh Kumar taught me has stayed with me through my journey. “I am fortunate to witness him getting the Lifetime Dronacharya Award for his contribution to India.” Mukerjea recalled how he started his tennis career looking up to him at the Calcutta South Club.

“He was already a top player when I started playing tennis at the age of 12-13. Premjjit Lal and I looked up to Naresh in our formative years.” “Whenever we came back from Tours, he has helped us a lot in our formative years. I made my debut under him against Thailand in 1960. “It was Naresh and myself as (Ramanathan) Krishnan was down with chicken pox.

He helped me a lot with my game. Later on we became very good friends.” A true gentleman to the core and always neatly-dressed, Naresh Kumar was also a well-known sports commentator-cumcolumnist, successful businessman, tropical aquarium fish breeder, art collector, horse racing aficionado.

He was also very close to former chairman and managing director of Tata Steel Russi Mody who died here in 2014. “Apart from being a tennis player, he was also a very good tennis writer, a commentator before the days of TV,” Mukerjea recalled.

“I vividly remember, he was not in the team in 1956 when India played Australia in in the Davis Cup final in Melbourne. He did a commentary in Hindi and English,” he added.

Russell, creator of “Marketplace,” has died

Check out the latest version of PUBG Mobile Lite, ALL DETAILS

Europe is scooping up future US liquefied natural gas supplies to prevent...

WATCH Video as Sarfaraz Ahmed Shows off his SINGING skills at Shan...

Who are the confirmed entrants for the Royal Rumble match?