England T20 WC squad: In what is a huge blow for England, in-form superstar Jonny Bairstow has been ruled out of the…

England T20 WC squad: In what is a huge blow for England, in-form superstar Jonny Bairstow has been ruled out of the upcoming T20 World Cup in Australia. Bairstow was named in the squad just hours earlier in an official ECB announcement but now has to withdraw after a ‘freak accident’ while playing golf. Follow T20 World Cup Live updates on Insidesport.IN

England have suffered a major injury blow with Jonny Bairstow ruled out of the T20 World Cup 2022 after an injury on Friday. Bairstow suffered a serious leg injury in what was described as a ‘freak accident’ while playing golf. The middle order maverick will undergo surgery and hence has been ruled out of the competition, ECB confirmed.

You’ve inspired and entertained us so much this summer. And you will again 💪

Bairstow himself confirmed the same on social media. In an Instagram story, he wrote, “Unfortunately, I am going to be unavailable of all games/tours in the immediate future. The reason being is that I have injured my lower leg in a freak accident and it shall need an operation. The injury came when I slipped on the golf course this morning. I am gutted and want to wish everyone for this week at The Oval all the best firstly and the boys that going to the T20 World Cup 2022 in Australia. Absolutely gutted.” 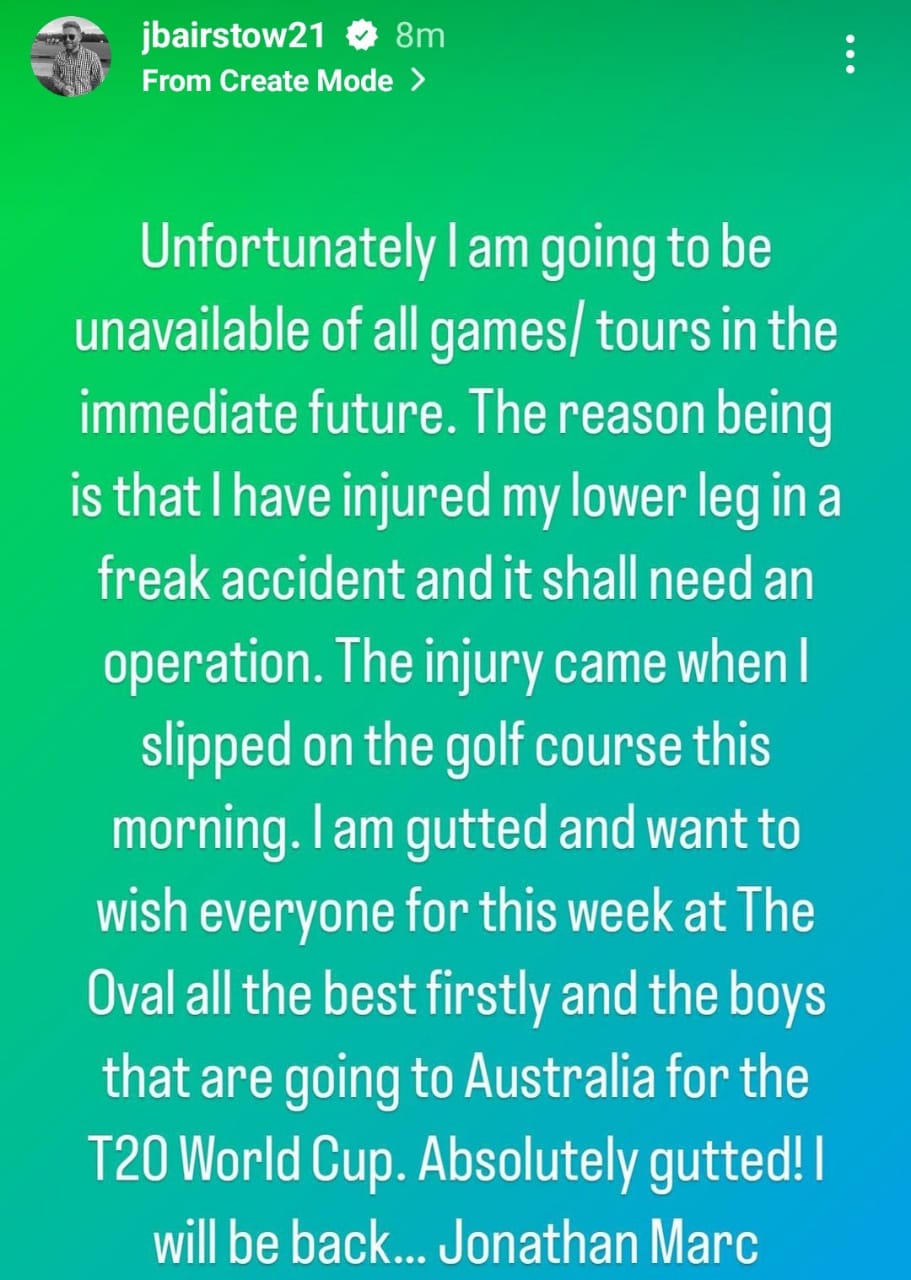 Since the turn of the year, Jonny Bairstow has been in the form of his life. he had hit six hundreds and over 1000 runs in Test cricket and was also the third-highest run-getter across formats so far this year while leading the charts for England. He scored a century in Sydney while also managed his highest T20I score vs South Africa last month.

Incidentally, Bairstow was named in the England squad for the T20 World Cup just hours before the confirmation of his injury. It will come as a rude shock for England who have will be without a host of their players who reached the semi-finals last year.

While Eoin Morgan has retired, Bairstow has been ruled out. Jason Roy another key member has been dropped. Meanwhile,ECB announced that a replacement for Jonny Bairstow will be named in the due course.