Aus vs NZ ODIs: Australia set to host New Zealand for three-match series, all you need to know about schedule, squads, match timings and live streaming

From 44/5 at one point, Australia fight back to clinch the first ODI 👏

With this victory, Australia is 1-0 up in the two-match series. New Zealand posted 232/9 in their 50 overs in the first innings. Devon Conway (46), skipper Kane Williamson (45) and Tom Latham (43) made notable contributions for the Kiwis. All-rounder Glenn Maxwell (4/52) was the star for the Aussies with the ball. Chasing 233, Australian batters were put to a test and lost early wickets. But Carey (85) and Green (89*) took their side across the finishing line with two wickets and five overs left. Pacer Trent Boult (4/40) did early damage to the hosts.

Put to bat first by Australia, Kiwis were off to a bad start as they lost Martin Guptill for just 6, with pacer Mitchell Starc getting his wicket after Maxwell took a stunning one-handed catch.

Captain Williamson was next up on the crease, playing only his fourth ODI since World Cup 2019. He built the innings further with Conway with a solid 81-run stand. Conway was trapped leg-before wicket by Adam Zampa for 46 off 68 balls, falling short of his half-century. NZ was at 91/2.

Tom Latham, the wicketkeeper-batter continued to keep the scoreboard ticking for Kiwis, not going towards the aerial route much. This cautious 36-run stand with Williamson was put to an end by Maxwell, who dismissed the latter for 45 off 71 balls. 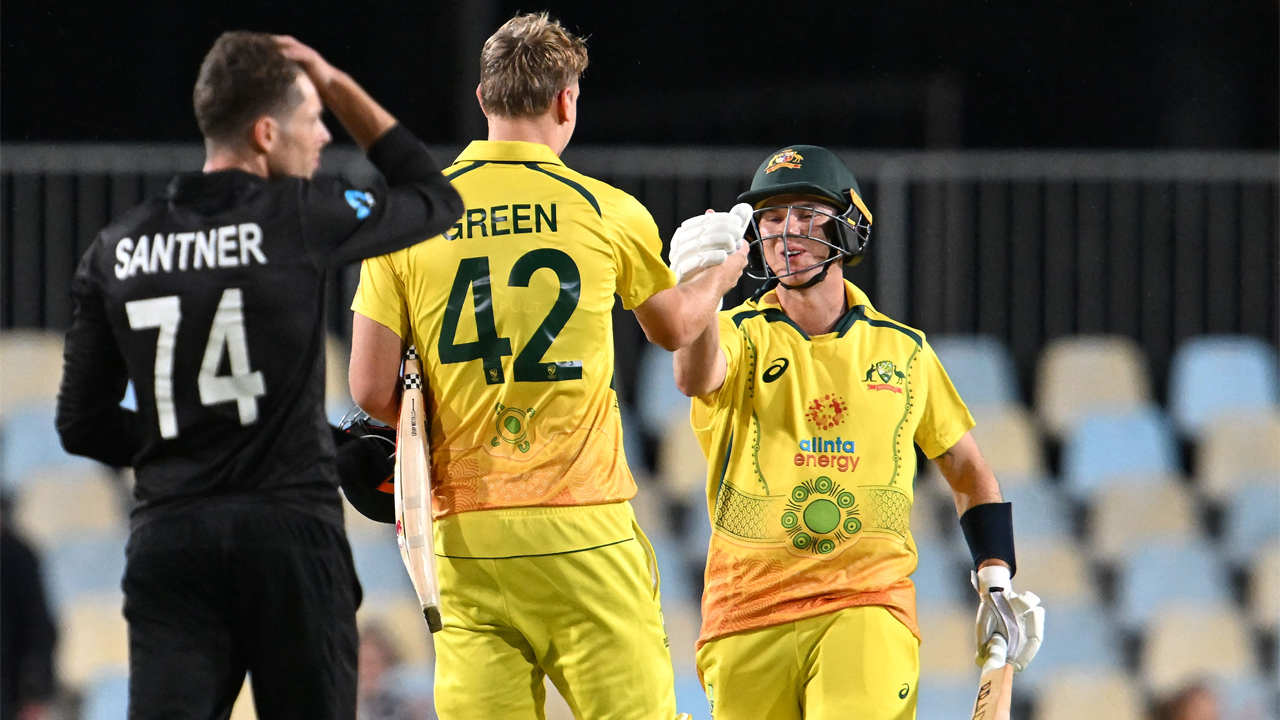 All-rounder Daryl Mitchell and Latham tried to take their side towards the 200-run mark without any further damage. But just 21 runs before that, Maxwell trapped Mitchell for 26 off 33 balls, ending a 52-run stand between Mitchell and Latham.

Maxwell continued to run riot over the Kiwi’s middle order, dismissing Latham (43) and Michael Bracewell (7) in quick succession. New Zealand was reduced to 191/6.

Following this, all-rounder Mitchell Santner and James Neesham carried New Zealand beyond the 200-run mark. But Hazlewood was the next bowler to trouble the Kiwis as he took the wickets of Neesham (16), Matt Henry (4) and Santner (13). This reduced the visitors to 223/9.

Lockie Ferguson (5*) and Trent Boult (6*) took New Zealand to 232/9 at the end of their innings. Maxwell (4/52) was the hero for Australia with the ball. Hazlewood also delivered a brilliant spell of 31/3 in 10 overs. Zampa and Starc also took a wicket each.

Chasing 233, Australia was off to an extremely horrendous start. The pace duo of Boult and Matt Henry bulldozed through the Australian top-order, sending half of the side back in the hut for 44 runs.

David Warner (20 off 25 balls) was the only top-order batter who could post something decent as captain Aaron Finch (5), Steve Smith (1), Marnus Labuschagne (0) and Marcus Stoinis (5) registered single-digit scores.

After this, the duo of Carey and Cameron Green had the weight of massive expectations on their shoulders. They had to help Australia reach a respectable total at least, with a win 189 runs away from their side.

Carey-Green spent their time judiciously, packing the right mix of caution and intent in their innings. The duo brought up their respective half-centuries, with Green registering his maiden ODI half-century.

The duo put on a 158-run stand and helped the hosts cross the 200-run mark. Pacer Lockie Ferguson delivered the breakthrough, dismissing Carey for 85 off 99 balls.

The game took another twist when Glenn Maxwell (2) and Mitchell Starc (1) were dismissed cheaply, reducing Aussies to 207/8.

Green and Zampa stitched a 26-run stand to take their team towards the target, sealing the match by two wickets.
Boult (4/40) was the leading bowler for New Zealand, but he could not guide his team towards a win. Henry and Ferguson took two wickets each.

Green’s unbeaten 89 off 92 balls earned him the ‘Man of the Match’ award.