Pedro Bravo, the head of the Spanish Football Agents’ Association (AEAF), made the comment on Thursday on the ‘Chiringuito Show’, one of Spain’s top football TV programmes, telling the 22-year-old player to stop celebrating his goals with his trademark dance moves The remarks touched a nerve in Brazil, where black players have been
heckled with racist taunts by fans mimicking monkeys. 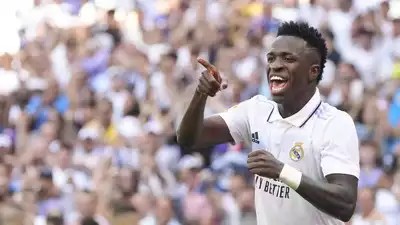 “Football is joy. It’s a dance,” living legend Pele wrote on Instagram. “Although, unfortunately, racism still exists, we will not allow that to stop us from continuing to smile. And we will continue to fight racism every day in this way: fighting for our right to be happy and respected.

Following the outpouring of support from fans and fellow footballers , Vincis Jr released a statement of his own. “I was the victim of xenophobia and racism in a single statement ,” he said.

” These are dances to celebrate the cultural diversity of the world. Whether you accept it, respect it or lose your mind about it, I’m not going to stop,” he said in a recorded address. The Brazilian Football Confederation (CBC) meanwhile expressed its solidarity with the player in a statement, condemning the “racist statements.

” Real Madrid said it rejected “all forms of racist and xenophobic speech,” and would “take legal action.” Bravo apologized on Twitter, saying he had “badly used the expression… in a metaphorical way to mean ‘fooling around.