Shah Rukh Khan’s son Aryan Khan is promoting the newly launched adidas Originals NMD_V3 by taking to his social media handle and sharing his favourite styles from the latest collection.“First launched in 2015, the NMD franchise immediately created a fan-base for itself in the sneaker world with its style and comfort. Built for a life in motion, the shoe is re-introduced in 2022 with an updated take on the original cutting edge innovator, channeling the very same independent mindset,” the company said.

Shah Rukh Khan’s son Aryan Khan, who recently shot for his first brand campaign, on Tuesday shared pictures from the brand’s photoshoot on social media. As he posted the photos on Instagram, he got a reaction from his parents, Gauri Khan and Shah Rukh Khan.

While Gauri was in awe of her son, Shah Rukh wondered if Aryan is wearing his t-shirt in the photos. 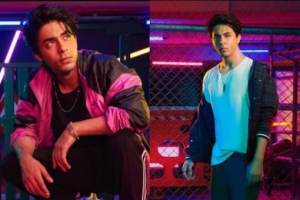 Gauri couldn’t stop herself from singing praises of her son as she commented on his Instagram post, “My boy … love love love.” But SRK was once again at his witty best while commenting on Aryan’s pictures. He wrote, “Looking really good!!…and as they say, that whatever is silent in the father….speaks in the son. By the way is that gray t-shirt mine!!!”

Shah Rukh’s comment left many on Instagram in splits. One of them replied on his comment saying, “@iamsrk khansaab the wittiest .” Another fan commented, “@iamsrk areyy sir.” A user also wrote, “T-shirt heist.”

Not just his parents, Aryan Khan got compliments from many of his parents’ friends like Maheep Kapoor, Sanjay Kapoor, Seema Sajdeh, and Pooja Dadlani. Pooja commented on the photo, “Someone’s on .” Seema and Maheep left heart and fire emojis in the comments section. Sanjay wrote, “🙌 Too cool ️ @___aryan___.”